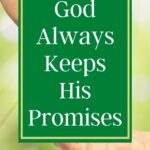 Does God always keep His promises?

However, there is One who will never disappoint us in this way.  God is all-powerful and all-knowing.  He is able to perform and complete every word He speaks. God always keeps His promises.

This quote from Corrie Ten Boom is so encouraging:

“I’ve experienced His presence in the deepest darkest hell than men can create… I have tasted the promises of the Bible, and believe me, you can count on them.”

What Does the Bible Say About God Being a Promise Keeper?

The Bible has a lot to say about God keeping His promises. Here are a couple of Bible verses about how God always keeps His promises.

This next verse tells us that the Bible is the Word of God, and because it is, it can be trusted.

All Scripture is inspired by God and beneficial for teaching, for rebuke, for correction, for training in righteousness; 17 so that the man or woman of God may be fully capable, equipped for every good work. – 2 Timothy 3:16-17 NASB

Does God Always Keep His Promises?

One of the ways that we can know that God is a promise keeper is by taking a look at the lives of people of faith who have gone before us. Let’s take a look at a few of the promises God has made to His people in the past.

God Kept His Promise to Noah

The Bible says that Noah was the only righteous man of his time. The world had become so evil and violent that all of humanity had become corrupt.

Can you imagine being the only person on earth walking rightly with the Lord? I can’t fathom how difficult that must have been.

God told Noah that He was going to destroy every living thing on the earth in a flood.

…and He did. If we continue reading in Genesis 7-8 we read that God kept His promise. Then, God made another promise to Noah.

Then God spoke to Noah and to his sons with him, saying, 9 “Now behold, I Myself am establishing My covenant with you, and with your descendants after you; 10 and with every living creature that is with you: the birds, the livestock, and every animal of the earth with you; of all that comes out of the ark, every animal of the earth. 11 I establish My covenant with you; and all flesh shall never again be eliminated by the waters of a flood, nor shall there again be a flood to destroy the earth.” 12 God said, “This is the sign of the covenant which I am making between Me and you and every living creature that is with you, for all future generations; 13 I have set My rainbow in the cloud, and it shall serve as a sign of a covenant between Me and the earth. – Genesis 9:9-13 NASB

God has faithfully kept His word to never destroy the earth by the waters of a flood. God is a promise keeper!

God Kept His Promise to Abraham

A few generations later we see God making another covenant with Abraham. There are many promises that God made to Abraham within this covenant. I just want to focus on one of them.

When God made this promise, Abraham did not have any children. Before God could make Abraham into a nation He had to give him an heir.

God kept His word to Abraham. However, He didn’t fulfill this promise within the time frame that Abraham had hoped. Genesis 12:5 says that he was 75 when the Lord first made these promises to him. Sara (Abraham’s wife) did not have their son, Isaac, until Abraham was 100 years old (see Genesis 21:5).

They had some waiting to do. If you know this story, then you know that they didn’t trust God perfectly while they waited. Yet, God remained faithful.

God Kept His Promise to David

Then, there’s King David. I love David. He wrote many of my favorite psalms of praise and thanksgiving.

King David wanted to build a house for the Lord. This may seem like a noble ambition, but God had a different plan. This story is a great example of how God always keeps His Word and does it in a way that is in accordance to His will.

God promised David that his descendant would be the one to build a house for His name and His kingdom.

When your days are finished and you lie down with your fathers, I will raise up your descendant after you, who will come from you, and I will establish his kingdom. 13 He shall build a house for My name, and I will establish the throne of his kingdom forever. 14 I will be a father to him and he will be a son to Me; when he does wrong, I will discipline him with a rod of men and with strokes of sons of mankind, 15 but My favor shall not depart from him, as I took it away from Saul, whom I removed from you. 16 Your house and your kingdom shall endure before Me forever; your throne shall be established forever.” – 2 Samuel 7:12-16 NASB

Many of the promises and prophecies in the Old Testament had a short-term and a long-term fulfillment. History reveals that this promise God made to David had was one that had this two-fold fulfillment.

God Kept His Promise to His People

Before Jesus came, God’s people were held under the Old Covenant or the Law. The law itself is perfect and reveals God’s holy standard. But there was a problem.

In Jeremiah 31 we see that God made a promise to His people of a new and better covenant.

Quick recap of what God promised His people:

God fulfilled these promises by sending Jesus. He became the final atoning sacrifice to permanently take away our sin.

He also sent the Holy Spirit to live within us. The Spirit is who leads us into further knowledge of God and enables us to walk in a manner pleasing to Him.

This promise wasn’t just for the nation of Israel, but for all who come to him in faith.

This is the greatest example of how God always keeps His promises!

We have looked at, just a few, occurrences of how God keeps his promises to a thousand generations. God has always kept His promises. Therefore, we can be assured that He will continue to do so.

Related: Standing Firm on the Promises of God

Know therefore that the Lord your God, He is God, the faithful God, who keeps His covenant and His faithfulness to a thousand generations for those who love Him and keep His commandments. – Deuteronomy 7:9 NASB

Megan loves to encourage women to abide in God's Word! At Megan Allen Ministries, she offers tips and resources to equip women to dig deep into God's truth and to cultivate a strategic prayer life.