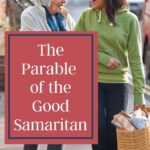 How does the Parable of the Good Samaritan relate to our lives today?

Have you ever been waiting in your car at a red light, or out shopping, and been asked for money by a down-and-out person? What did you do? Did you help? Did you squirm with discomfort and apologize that you don’t have any cash or change on you?

I’m sure many of us have been in this position many times, and if you’re anything like me, you fight an inner battle every single time between wanting to help and feeling resentful at the same time. After all, I can’t afford to help everyone who asks! And how do I know they’ll really spend it on food? What if they actually just spend it on drugs?

If I help, I feel the judgment of others who believe I’m enabling addiction or laziness. If I don’t help I feel the weight of guilt. The inevitable discomfort of either decision might cause me to pretend I don’t see that person in need, convincing myself that if I don’t notice them, then my conscience is off the hook.

Deep down, we know this isn’t true, but the inner struggle we experience every time we are faced with the inconvenience of compassion is very real. This inner struggle is common for all of us, but fortunately, in his extravagant grace, Jesus embraces us in our discomfort and invites us into the freedom of his own loving perspective.

What Happened in the Parable of the Good Samaritan

In Luke 10:25:37, Jesus tells the story of a man traveling from Jerusalem to Jericho. On the way, he is attacked by a band of robbers, stripped of everything he has, savagely beaten, and left for dead.

He tends and bandages the wounded man, takes him into town, finds him a place to stay, and continues to nurse him. Before he leaves the next day, he pays the innkeeper a deposit to continue his care, promising to reimburse any extra expenses the next time he passes through.

What is the Main Message of the Parable of the Good Samaritan?

In the parable of the Good Samaritan, Jesus is explaining not only how to love our neighbors, but who our neighbors are. This parable was Jesus’ response to a man who was an expert in the law, and was asking Jesus a question he believed he already knew the answer to.

Not only was he putting Jesus on the spot to test him, but he may also have been taking advantage of an opportunity to show off his own knowledge and impress the crowd. Pride was at the heart of the man’s question, but humility was at the heart of Jesus’ answer.

If studying the Bible better is on your list of things to do this year, be sure to visit our Bible Study Resources page where you'll find everything you need to make Bible study a regular part of your daily routine.

When the expert in the law asked Jesus, “who is my neighbor?” he used a word the Jewish teachers generally used to mean “fellow Israelite,” (Leviticus 19:13). It’s likely that this man wasn’t looking for genuine wisdom so much as he was looking for justification for his own comfort zone.

The Priest, the Levite and the Samaritan

The first one, Jesus tells us, is a “priest,” and the second, a “Levite.” Since technically both of these men were “priests,” why would Jesus have used them both as his examples?

The word for “priest” that Jesus uses in verse 31 actually means “high priest.” This is significant because the position of high priest came with added responsibility. This was the position that Moses’ brother, Aaron, was given by God, and his son after him, and so on.

It was the responsibility of the high priest to offer sacrifices on behalf of the people, and only the high priest was permitted into the “holy of holies” the sacred area behind the veil in the temple, and only on one day a year, the day of Atonement. The high priest could not come into contact with anything that would make him “unclean,” (such as blood, or a dead body), because it would prevent him from being able to carry out his duties in the temple.

This would be incredibly inconvenient, adding to the already long list of jobs for the other priests to do while he was out of commission for the full 7 days that the Lord had specified before he could re-enter the temple.

The Levite who passed by next, though also a priest, had a lower position in the temple, and therefore fewer responsibilities. It wouldn’t have been as big a deal for a Levite to have been absent from temple duties for a time.

But Jesus mentions an important detail about the geographical location of this story. It takes place on the road between Jerusalem to Jericho. This is an important detail because the most frequent travelers on this road would have been priests and Levites who lived in Jericho but traveled to Jerusalem frequently to carry out their responsibilities in the temple.

Also, due to the rocky and somewhat treacherous condition of the route, it would have been a prime location for robbers, making travelers an easy target. It’s likely that the Levite was more concerned about becoming a victim himself than becoming “unclean,” (Dr. John Nolland, Word Biblical Commentary on Luke (Vol 35B).

Finally, a man from Samaria comes along and stops to help the wounded man. The fact that this man is a Samaritan is significant because Jews and Samaritans were not friends. In fact, Samaritans were regarded as enemies.

After Israel was taken captive by the Assyrians in 721 B.C., some were left behind, intermarrying with the Assyrians, producing Samaritans. The Samaritan people were half-Jew, half-Gentile, and had their own version of scripture, (the Torah), and their own religious system.

They disagreed with the Jews about where was the proper place to worship, and had political differences as well. In general, the Jewish people regarded Samaritans as “half-breeds,” or “dogs,” who were inferior, unfaithful and untrustworthy. They looked down on Samaritans as “less-than,” and had “no dealings” with them, (John 4:9).

What Does the Good Samaritan Symbolize

The Good Samaritan symbolizes the heart of God towards all people, regardless of who we are, where we come from, our social status, religious background, or political views.

This story shows us that the sacrificial love, care, and compassion of God for all who are hurting. His heart and desire are that our reflection of his compassion and care for others takes precedence over any differences we may have; that our love for people is indiscriminate, like His.

The hard truth is that our conscience is never “off the hook” when we withhold compassion, but the good news is that the weight of responsibility for determining who deserves our mercy doesn’t rest on our shoulders. We never have to bear the burden of judging another person’s worthiness incorrectly.

When you think about it, there’s tremendous freedom in this realization! There’s no set of rules, criteria or qualifiers to learn and remember. No cosmic scoring system or checklist to master. No fear of getting wrong, or distributing it inappropriately.

God’s answer to the question: “to whom should I show mercy?” is “Everyone! Don’t worry about who it is, just pour out compassion and leave the rest to me!”

It doesn’t take much effort to find an excuse to justify ourselves when we want to avoid the inconvenience of loving someone. Sometimes we spiritualize it by telling ourselves we’re “avoiding the appearance of sin” or that we’re avoiding being a “stumbling block” that enables someone else’s sin.

Sometimes we hide our fear under a cloak of responsibility because “our families need us.” The worst excuse is when we justify our inaction by judging the other person as “unworthy” or “undeserving” of help.

The moral of this story is that as far as Jesus is concerned when we are confronted with an opportunity to show compassion and care for someone, there is no excuse good enough to justify holding us back. His command to love sacrificially and unconditionally trumps, (and even encompasses), every other command.

What Does the Parable of the Good Samaritan Teach Us

The parable of the Good Samaritan teaches us not only who God considers our “neighbors” to be, but how He wants us to love them. Without judgment. Without justification. Without compensation. And even without recognition.

The Good Samaritan is the very image of extravagant grace, at great personal cost, but with immeasurable eternal value. The message of this parable is clear: love all people, and love them no matter what.

Sadly, our world is still full of division and judgment, and sadder still, the body of Christ is no exception. We still bicker over doctrine, interpretation, and application. We still use the word of God to justify ourselves in our lack of grace for one another, using our differences to justify withholding compassion and care.

Are we patient? Are we kind? Can we meet them where they are, just as Jesus does for us, and attend to the needs of their hearts?

Related: What is the Fruit of the Spirit and Why Does it Matter

In light of this passage, the reality is that our patience and kindness; our compassion, should not be earned, but lavished; even, (and especially), toward those we think deserve it the least. This is the only true reflection of the character of God in our world, for:

“The Lord is gracious and full of compassion, slow to anger and great in mercy. The Lord is good to all, and His tender mercies are over all His works.” Psalm 145:8-9

Hi! I'm Jennifer and I blog over at Well Words where I offer Biblical encouragement and tips for finding beauty in unexpected places!

46 shares
Scroll to Top
We use cookies to ensure that we give you the best experience on our website. If you continue to use this site we will assume that you are happy with it.OkNoPrivacy policy