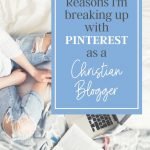 I know it isn’t very Christian-like to say I hate something but Pinterest is the worst!!

I think it is safe to say that most bloggers have a love-hate relationship with Pinterest! It can turn from being your best blogging friend to your worst enemy in the blink of an eye with the never-ending algorithm changes. UGH!

I’m almost positive that Pinterest and boxed hair color are in cahoots with each other (the more stressed out we are over Pinterest, the more we need to color those gray hairs!)

That’s why I’ve decided that this year, I’m going to spend significantly less time on Pinterest and more time doing things that matter (and cause me less stress!).

By June 3rd (6 months after going live), Pinterest had referred over 34,000 visitors!

But that success was short-lived. By the end of the first year, my Pinterest traffic hit a plateau and organic visitors (people being referred by Google and other search engines) had had taken the first place referral spot.

AND….although Pinterest traffic stayed steady and/or had a decrease, my organic traffic was more each month than the prior month. Organic traffic just kept growing!

Pinterest is great, but it requires quite a bit of your time.

In order to keep your Pinterest traffic from taking a nose-dive, you need to constantly be sharing pins and adding new pins for older content. This can easily take away a good chunk of your blogging time each week!

You’ve worked hard on creating all those great pins and scheduling content to boards and Tailwind Tribes. Things seem to be going well, then – NOSE DIVE! You wake up one morning and your Pinterest stats seem to have tanked overnight! Why? Because Pinterest did yet ANOTHER algorithm change!

Next thing you know, you are spending an entire day or more trying to figure out the newest “way” to go about Pinterest and making the necessary changes. But that is after you spent several hours in blogger Facebook groups trying to figure out what was going on (time you could have been writing more great content).

Second only to “has anyone else’s Pinterest traffic tanked?”, the next most common complaint among bloggers is the issue of stolen pins.

You spent all that time and effort creating all those great pins and sharing/scheduling them to boards and tribes and suddenly certain pins stop generating traffic. Why? Because someone redirected your pin image to their site.

Even though you report the stolen pin (or an entire account of stolen pins), you don’t get the traffic back and chances are, if Pinterest even does anything about it, they’ll just create a new bogus account and continue stealing your pins!

All this time that you spend dealing with pin thieves – you could be writing more great content!

SEO, on the other hand, results in much more traffic each month (when compared to the month prior). And the best thing about getting organic traffic from SEO is that it is almost a set-it-and-forget-it kind of thing. I publish the post and once it is indexed by search engines, the traffic keeps coming. I don’t have to continue pinning it or making new pins for it. The traffic just keeps coming!

[bctt tweet=”SEO is a much better tool than Pinterest for continually driving more and more traffic to your Christian blog! ” username=”kingdomblogger1″]

The image below shows a comparison from the first 6 months to the most recent 6 months of Kingdom Bloggers’ traffic. Even though my Pinterest routine didn’t change, traffic decreased during the last 6 months. Traffic from Google, however, increased by over 600%!

Spending My Time Where it Matters Most

I’m all about spending my time where it matters most. After spending way to much time last year trying to keep up with Pinterest’s neediness, I’ve decided that, this year things will be different. I’m not giving Pinterest up completely. I’ll still create a pin for each post and add it to tribes and boards. But I won’t fret about continually making new pins or keeping my Tailwind queue filled.

Actually, during this past holiday season I actually let my Tailwind queue go empty! My Pinterest traffic dropped around 10% from the month prior. But my organic traffic (just from Google) increased by 21%. So even though I was absent from Pinterest for about a month, I managed to get more traffic than the month before when I had been on Pinterest (thanks to SEO)!

I encourage you to take a deep look into your traffic analytics to see exactly where your traffic is coming from. Then take a look at where you are spending the bulk of your time and ensure that you are getting a good return on that time investment.

As for me, Pinterest and I are more of an acquaintance these days and I’ve found a new, deeper relationship with my new friend – SEO.

76 shares
Scroll to Top
We use cookies to ensure that we give you the best experience on our website. If you continue to use this site we will assume that you are happy with it.OkNoPrivacy policy