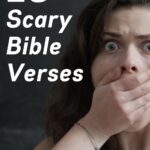 Scripture is full of God’s love and salvation, which we know is the running theme, but we must understand that there is a darker side.  Come along with me and study these scary Bible verses.  You may be surprised at the dark curses, unusual stories, and amazing power of God.

Scripture is full of stories that might cause us to raise our eyebrows and swallow hard.  The poor decisions made by the ungodly result in miserable situations leading to suffering or death.

The concept of hell alone with its weeping and outer darkness is enough to terrify me.  I don’t know about you, but I do NOT want to be on the wrong side of a holy, all-powerful God.

All of these Bible verses are a result of a fallen world.  Let’s clarify this right from the beginning.  God is not wicked or evil or scary.  He is good (all the time!) and his mercy and love are unbounding.

Any scary Bible verses are a direct result of sin, pride, satan, wickedness etc.  Those things are the opposite of who God is.

To put this in perspective, let’s talk about Genesis.  When God created the world, He said that it was good.  Nothing was amiss, everything lived in harmony.

God created a beautiful garden and made His most important creatures of all Adam and Eve.  They lived in a perfect state with all of God’s creation.  A place mankind has tried unsuccessfully to return to throughout all of history.

And then sin entered the world and suffering began.  Enter our scary Bible verses.

The first of our scary Bible verses come right from the story of man’s fall and are curses from God.  These aren’t the only curses in scripture, I’ve got a list here.

Revelation is one of those books that everyone talks about and no one perfectly understands.  The unknown, the figurative language, and the overall scary predictions can leave one feeling a bit nervous (or stressed!).

Before I list the scariest verses in Revelation (I don’t know how I chose these particular ones, because there are many more than I list here), I want to remind you that you do not want to live for God out of fear.  Serving God simply because you do not want a terrible end is not enough to bring you into a healthy relationship with your Heavenly Father.

While the idea of hell and the end of the world are very real and necessary to learn about and might even make you think about the direction your life is going, God doesn’t want to scare you into serving Him.  That is not His method.  Romans 2:4 tells us that God’s kindness (some translations say “goodness”) brings us to salvation.

While you study these verses remember that God is good, He is love and peace and a God of order.  All of the scary is a result of a sinful world.

The last of our scary Bible verses talk about death.  We are going to begin with a few less than pleasant ways to die that are mentioned in scripture and then we are going to talk about hell because few ideas are scarier than spending eternity burning.

King Herod– Acts 12:21-23 tells us that King Herod put on his kingly robes and delivered an address to the people.  The people hailed him as a god and in his arrogance, he did not correct them.  Because of this pride, God struck him dead and the worms ate him.

Absalom– 2 Samuel 16-18 tells us the story of how David’s son, Absalom, tries to steal the throne away from him.  Absalom was known for his beautiful hair and attractive looks.  I’m guessing he was also arrogant and prideful.  As we saw with King Herod above, God does not look kindly on such an attitude.  During a battle, Absalom’s hair becomes entangled in a tree branch and he’s left hanging there.  Of course, David’s men take the opportunity to remove the threat to their king’s throne and Absalom meets an early end.

Lot’s wife– Genesis 19 tells us about the destruction of the wicked cities of Sodom and Gomorrah.  In his mercy and for His love for His servant Abraham, God sends two angels to go into the city and warn Abraham’s nephew and his family.  The angels urge Lot and his wife and their daughters to quickly leave the city and do not look back.  Lot’s wife, not willing to let go of the life she had there, looks back just as God sends fire.  In a split second, she is turned into a pillar of salt.

Jehoram– 2 Chronicles 21 contains the story of Jehoshaphat’s son, Jehoram, who did evil in the sight of the Lord.  God sent Elijah to warn him of his sin and proclaim a punishment upon him.  The punishment was that God would send a disease of the bowels in which they would end up coming out and Jehoram would die a painful death.  I’m not exactly sure what it means that his bowels came out, but that could not have been a good way to go.

Ok, now on to scary Bible verses about death and hell.

So, how are you feeling about this round-up of scary Bible verses?  I feel like I’ve introduced you to a darker side of scripture that many of us don’t talk about.  Gone are the days of fire and brimstone being preached from the pulpit.  Love and grace go down a whole lot easier.

That being said, these truths remain truths.  There is a hell and those who do not love and obey God will go there.  It is also true that the end of the world does not hold a lot of good things for those who miss the rapture.

God is love and mercy, but He is also holy and cannot abide wickedness.  This should motivate us to not only get our own hearts right before God but encourage those around us to do the same.  You could use these scary Bible verses to give a few friends a little nudge 😉