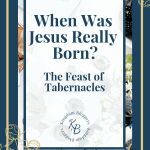 When Was Jesus Really Born?

The question “when was Jesus really born” has been one that people have speculated over for years. At the end of the day, does it really matter?

Well, as a doctrinal issue, no, it doesn’t really.

Our salvation and our relationship with God has nothing to do with when Jesus was born. So in that regard, no. It makes no difference at all.

But as a matter of understanding God’s use of the Biblical festivals to paint pictures of Jesus and the work of redemption since the beginning of time, yes. It does matter. 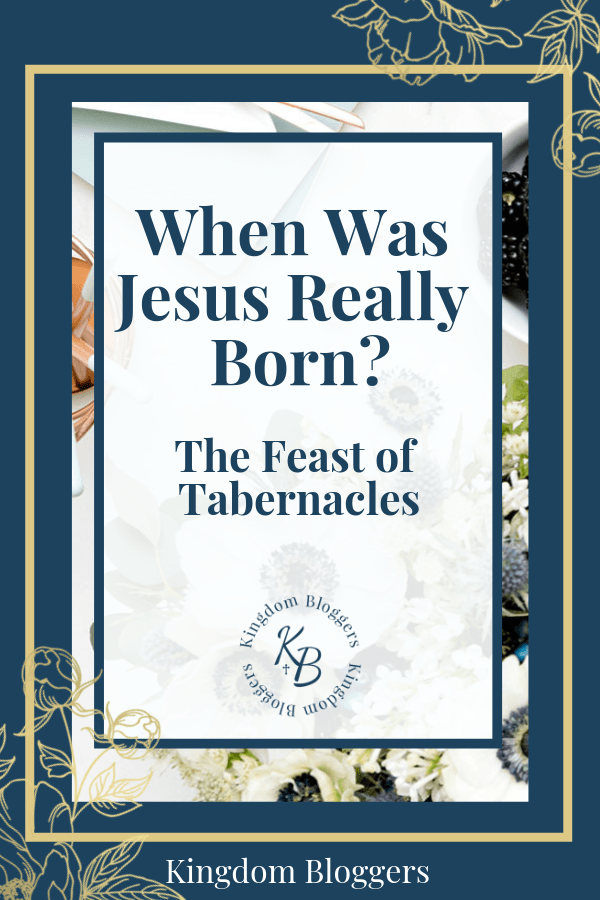 God was pointing the way to the cross since creation and if we learn how He timed certain events to fall during Biblical festivals we can gain a deeper understanding of Him, His Word, and His plan.

God does not do anything in a vacuum. Everything in His Word matters! There is a reason behind His timing both then and now. So knowing this has no bearing on our salvation, but it does help us to see Him in a deeper way!

Contents hide
1 The Feast of Tabernacles
1.1 The Shepherds
1.2 No Room at the Inn
2 Simchat Torah
3 Other Evidence for Jesus’ Birth In the Fall
3.1 Conception and Birth of John the Baptist
4 Jesus is Lord

The Feast of Tabernacles

The Feast of Tabernacles is the Biblical festival of Sukkot. It begins on the 15th day of the Hebrew month of Tishrei and lasts for 7 days. It is then followed on the 8th day by another festival known as Simchat Torah, which is the conclusion of the annual Torah cycle and begins a new cycle of annual public Torah readings.

These are the same Torah portions we see each Shabbat (Sabbath).

So how do we know that Jesus, or Yeshua, was NOT born on December 25th?

Well, for the purposes of keeping this a blog post and not a book, I will just say that some reasons for a December 25th date can be found HERE.  There are plenty more sources but this will give you a brief synopsis.

Once you know why it is not December 25th (that much we are sure of), here is why I believe it was during Sukkot. This is just my “theory” and is in no way being asserted as fact. Again, I want to stress that this is just for information and learning and not to change anyone’s doctrinal stance!

The Bible tells us in Luke 2:8

And there were in the same country shepherds abiding in the field, keeping watch over their flock by night.” Luke 2:8 KJV

In Israel, the shepherds typically take their flocks out from Spring to Autumn, not in the winter. There would not have been flocks at night in the fields in December in Israel.

No Room at the Inn

He was laid in a manger because there was no room in the Inn.  But was it really an Inn?

The Greek word for Inn here is “katalyma” which simply translates to place of lodging or temporary shelter.  The word Sukkah is a Hebrew word that also means a “temporary shelter” and a place where the Israelites lodged during the week of Sukkot.

It is a temporary structure, much like a hut, having at least three walls and a covering. The covering is usually made up of branches so that it provides shelter from the elements but allows the stars at night to be seen.

In contrast, if we look at Luke 10:34 the word “Inn”, as used here in Greek, is “pandocheion” which translates to “A public house for the reception of strangers” It is a different word for “Inn”.  This instance is a public place meant for the lodging of strangers where katalyma is simply a temporary place of lodging.

It would seem to indicate that there may have been a sukkah that afforded them no room (and would not have been ideal for giving birth) so they used an adjacent stable. Since a sukkah is outside it would make sense animals and a stable were close by. All families in Israel would be residing in their sukkah during this timeframe so the odds of anyone staying inside at an inn would be unlikely unless it was a foreigner.

Miryam and Yoseph (Mary and Joseph) would have sought to shelter, as they were observant Jewish people, in a sukkah but since they were built to accommodate the size of the family it was constructed for, there was likely no room and the family likely offered a nearby stable to them.

The fact that the word for inn used differs from the other instances of “inn” in the Hebrew could make this a plausible scenario. But again, this is just a theory; we obviously have no solid evidence for this having been the case.

And the Word was made flesh, and dwelt among us, (and we beheld his glory, the glory as of the only begotten of the Father,) full of grace and truth.” John 1:14

It literally says “And the Word was made flesh, and tabernacled among us.”

However, Simchat Torah makes it a little more likely!

Luke chapter 2 tells us that Joseph circumcised Yeshua eight days after His birth in accordance with the law in Leviticus 12:3.

Eight days after Sukkot is Simchat Torah.  So, placing His birth on Sukkot, this essentially means Yeshua’s circumcision, His first fulfillment of Torah law since His birth, coincides with Simchat Torah, the new Torah cycle for the year.

Makes perfect sense for the fulfillment of the Law Himself to be circumcised, His first act of obedience, at the beginning of the Torah cycle.

Jesus is our living, breathing Torah! He IS the Word!

[bctt tweet=”Jesus is our living, breathing Torah! He IS the Word!” username=”kingdomblogger1″]

Other Evidence for Jesus’ Birth In the Fall

Luke 1:5 tells us a bit of interesting information about Zechariah, the father of John the Baptist:

In the time of Herod king of Judea, there was a priest named Zechariah, who belonged to the priestly division of Abijah; his wife Elizabeth was also a descendant of Aaron.” Luke 1:5 KJV

the seventh to Hakkoz, the eighth to Abijah” 1 Chronicles 24:10 KJV

This means that out of the 24 orders of service, the family of Abijah was the 8th to serve.

Their cycle of service began on the first Sabbath in Nisan, which is the first month of the Jewish year. It coincides with March-April on our calendar.

The priests would serve for one week, with the next taking over on the following Sabbath. They would also serve during the festivals.

This means there were two times per year that each would serve, given 52 weeks per year as well as the festival periods.

Now given that Abijah was 8th in line, that would mean Zechariah likely served in June and again in December.

Once when Zechariah’s division was on duty and he was serving as priest before God, he was chosen by lot, according to the custom of the priesthood, to go into the temple of the Lord and burn incense. And when the time for the burning of incense came, all the assembled worshipers were praying outside.

Then an angel of the Lord appeared to him, standing at the right side of the altar of incense. When Zechariah saw him, he was startled and was gripped with fear. But the angel said to him: “Do not be afraid, Zechariah; your prayer has been heard. Your wife Elizabeth will bear you a son, and you are to call him John. He will be a joy and delight to you, and many will rejoice because of his birth, for he will be great in the sight of the Lord. He is never to take wine or other fermented drink, and he will be filled with the Holy Spirit even before he is born. He will bring back many of the people of Israel to the Lord their God. And he will go on before the Lord, in the spirit and power of Elijah, to turn the hearts of the parents to their children and the disobedient to the wisdom of the righteous—to make ready a people prepared for the Lord.”

Zechariah asked the angel, “How can I be sure of this? I am an old man and my wife is well along in years.”

The angel said to him, “I am Gabriel. I stand in the presence of God, and I have been sent to speak to you and to tell you this good news. And now you will be silent and not able to speak until the day this happens, because you did not believe my words, which will come true at their appointed time.”

Meanwhile, the people were waiting for Zechariah and wondering why he stayed so long in the temple. When he came out, he could not speak to them. They realized he had seen a vision in the temple, for he kept making signs to them but remained unable to speak.

When his time of service was completed, he returned home. After this his wife Elizabeth became pregnant and for five months remained in seclusion.

Conception and Birth of John the Baptist

So this says then when Zechariah finished his time of service, he returned home and AFTER this Elizabeth became pregnant.

This would put the time of the birth of John the Baptist around Passover.

“In the sixth month of Elizabeth’s pregnancy, God sent the angel Gabriel to Nazareth, a town in Galilee, to a virgin pledged to be married to a man named Joseph, a descendant of David. The virgin’s name was Mary. The angel went to her and said, “Greetings, you who are highly favored! The Lord is with you.”

So we know Jesus was approximately six months younger than John the Baptist.

If John was born in the month of Nisan during Passover, that would put the birth of Jesus in the fall and likely during the Feast of Tabernacles.

Be sure to read more about the Jewish Roots of Christianity:

Whether born on December 25th or in the fall, whether it was an inn or a sukkah, what matters is He is Lord and we can rest assured He is coming again!

He came as a sacrifice for our sins, but He is coming again as the Lion of the Tribe of Judah to rule and reign for all eternity! THAT is what matters.

Diane Ferreira of Worth Beyond Rubies is a wife and mom, a Jewish believer in Yeshua (Jesus) and yes, a blogger. She lives in BEAUTIFUL Northwestern Connecticut and when she not blogging, you will find her spending time with her husband and kiddos…or up in her craft room designing custom tumblers, making reading pillows or quilting! She is also an avid amateur genealogist and loves researching her family history! You can follow her on Facebook, Twitter, Instagram, and Pinterest!