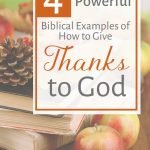 This is the season we all have an opportunity to remind ourselves to have a spirit of gratitude and giving thanks to God.

But what is Thanksgiving to God? How do you say thanks to God? I mean, He is just so amazing that a simple “thank you” doesn’t seem like enough!

Even though we live in a society of abundance, we have a tendency to focus on what hasn’t gone well and complain about it instead of the things that did go well and feel grateful. Because of this, it seems wise that a special day for Thanksgiving was designated in the United States, a tradition since the 18th century that started as a harvest festival.

But the Biblical importance of giving thanks goes way back. The Bible has a lot to say about how to give thanks God both – when all is well and when all is not so well.

Why is Thanksgiving to God Important?

As followers of Christ, we are to recognize and honor God as our Creator. This helps prevent us from becoming ungrateful or trying to take credit for things ourselves. When we lose our focus on God and thanking God it distorts us spiritually in our minds and hearts.

But more importantly, when we give thanks to God, we are praising Him for all that He is, all that He has done, all the He is doing, and all that He will do in our lives.

Giving Thanks to God for Everything

Having a heart of Thanksgiving to God means that we continually thank Him for everything. We shouldn’t just thank Him when things go well. We should also be thanking Him through the struggles that we will, inevitably, go through in life.

And we should thank Him for the people He has placed in our lives.

The Apostle Paul mentioned doing in that He made it a point to thank God for his friends and church family when he wrote:

“We always thank God for all of you, making mention of you constantly in our prayers.” 1 Thessalonians 1:2 (CSB)

This verse might have influenced our tradition of expressing gratitude for food, family & friends as we gather at the Thanksgiving meal.

Biblical Examples of Thanksgiving to God

To help us appreciate the value of thanking God even for little things and under all circumstances, let us look at 4 characters in the scriptures and examine how they displayed thanksgiving to God in a variety of ways.

As you read, try to see if some of these examples of thankful people in the Bible resonate more with the situations in your life.

Prophet Daniel Gave Thanks to God

The story of Daniel is a popular and inspiring story about faith in God through all things. God blessed Daniel, a Jew brought as a captive from Jerusalem to Babylon at the age of twelve, and he becomes one of the wise men in king Nebuchadnezzar’s palace.

Then came a crisis when the king forgets a dream he had but, as strange as it may seem, expected his wise me to come up with his dream or else face the death penalty. An impossible assignment.

But God answered Daniel’s prayer and revealed the dream and its interpretation.  What is Daniel’s response? He immediately gives thanks to God with a prayer of thanksgiving:

I offer thanks and praise to you, God of my fathers, because you have given me wisdom and power. And now you have let me know what we asked of you, for you have let us know the king’s mystery”. Daniel 2:23 CSB

We can say that Daniel thanked God in response to answered prayers. Don’t we all do the same? How about when things didn’t go that well? Yes, Daniel faced that situation a little later in his life. It happened during the reign of another king when Daniel had to face a royal decree that everyone should only pray to the king and no one else.

When the king’s order curbing the freedom of prayer was announced, Daniel calmly and deliberately continued to pray and thank his God openly. The Bible says:

When Daniel learned that the document had been signed, he went into his house. The windows in its upstairs room opened toward Jerusalem, and three times a day he got down on his knees, prayed, and gave thanks to his God, just as he had done before.” Daniel 6:10 CSB.

As the story goes, Daniel was punished for being true to his beliefs by being thrown into a lion’s den and God miraculously rescued him.

Wow, what courage to be thankful and to be true to his convictions even when things didn’t go his way!

King David Gave Thanks to God

The book of Psalms in the Bible, mostly written by King David, is said to be read more than any other book in the scriptures. We know that David was anointed at a young age by the prophet Samuel.

A favorite Sunday school story is about how young David bravely faced and killed the giant Goliath with just a slingshot. He then went on to become a valiant warrior and reigned as the king of Israel for a long time.

In spite of the glamor, David’s life was also full of battles, family betrayals, murder plots, falling into sin, and grieving the loss of a child. But each time he bounced back by God’s grace. All through these difficulties and triumphs, David penned some of the beautiful and heart-felt poems in which giving thanks seems to be a common thread.

Here are just a few examples of eloquent verses about giving thanks to God from the Psalms:

I always turn to Psalms when I feel down and depressed. David’s words proclaiming God as his strength, refuge, hiding place, strong tower, and shelter in the storm keep lifting our spirits even today and encourage us to have a heart of thanksgiving to God in all circumstances.

Apostle Paul Gave Thanks to God

Considered as one of the most important figures in early Christianity, the Apostle Paul founded several churches in Asia Minor and Europe after his dramatic encounter with Christ and becoming His follower. But he also faced numerous troubles including imprisonment, beatings, threats, and near-death encounters for boldly proclaiming that Jesus is the Son of God.

Through all the difficult experiences, Paul not only learned the meaning of true thanksgiving but also applied it in his daily life. For example, when he was imprisoned in Rome, he wrote about giving thanks to God in his letter to the Ephesians,

Sing and make music in your heart to the Lord, always giving thanks to God the Father for everything, in the name of our Lord Jesus Christ.” Ephesians 5:19-20 (NIV)

With many early Christians looking to Paul as a role model, he encouraged them to give thanks at all times. He wrote,

“Don’t worry about anything, but in everything, through prayer and petition with thanksgiving, present your requests to God.” Philippians 4:6 (CSB)

Jesus Gave Thanks to God

The example set before us by our Lord Jesus Christ shows us once again the importance of giving thanks to God.

Jesus gave thanks for the food as recorded several times in the scriptures. For example, at the time of the miraculous feeding five thousand people with five loaves of bread and two fish, it is written,

“Then Jesus took the loaves, and after giving thanks he distributed them to those who were seated—so also with the fish, as much as they wanted.” John 6:11 (CSB)

Another example recorded was at the scene of raising Lazarus who had been dead for three days. We read that Jesus prayed and thanked God even before the miracle by saying:

This intriguing prayer sets an example and a pattern we can follow for offering thanksgiving to God in prayer. As we pray in faith and bring our petitions before God, we should practice an attitude of gratitude. Prayers of Thanksgiving strengthen faith and prepares us for the miracles of God.

The Power of Thanksgiving to God

When we make thanking God a regular part of our day, He will relish in our praises of Him! Beginning our prayer time with gratitude and thanksgiving for how amazing and wonderful He truly is, makes our prayers so much more powerful.

I hope you find in these Biblical examples of giving thanks to God some answers for how you can give thanks to God in all situations. Let us never become content with all our blessings but let us ALWAYS be thankful to God with a heart of gratitude and praise.