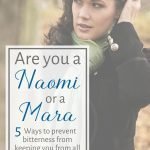 Life is hard. There are no doubts about that. But some trials are harder than others.

There are some trials that just seem to take everything you have. Kind of like some wounds cut deeper than others. Those trials and wounds can leave us feeling bitter.

That’s what happened to one woman in the Bible. Her name was Naomi, but she asked those around her to call her Mara (Ruth 1:20). Why?

Because Naomi means pleasant, and Mara means bitter. And Naomi was bitter about where her life had taken her. Worse yet, she blamed her problems on God.

Sometimes I find it’s easy to look at people in the Bible and judge them. Like, how could they have such little faith? But then I take a step back and realize that their life was just as real to them as ours is to us. If I were to step into their shoes, I have no idea how I would handle things. But I do know how I handle what life has thrown me… and it’s not always pretty.

The Struggles of Life

After giving over 18 years of my life to the military, they put me out with a medical discharge. They could have let me stay in for the additional 2 years needed to receive full retirement pay – but they just kicked me to the curb like it was nothing!

I had no job. I was pumped up full of medication and could barely think. I had no family or friends close by.

Oh, and did I mention? I was a single mom with 2 small children!!!

Like many veterans, I was so angry and bitter at how the military had treated me.

But, after about a year of just being angry (and accomplishing very little to move forward), I finally realized that I needed to turn that bitterness into something productive or else I'd be stuck in that place forever!

For I see that you are in the gall of bitterness and in the bond of iniquity.” Acts 8:23 ESV

“Another dies in bitterness of soul, never having enjoyed anything good.” Job 21:25 NIV

5 Ways To Avoid Becoming A Mara When Life Is Hard

I think we all struggle with becoming bitter from time to time. It’s just one of the emotions we have. It’s part of our sinful nature. But as long as we struggle against it, as long as we don’t stop and embrace it, welcoming it as a long-lost friend, I think we’ll all end up okay.

So how do we do that? What steps do we take once we realize we’ve become bitter?

When Jesus called Peter out of the boat, Peter literally walked on water. Right up until his focus shifted from Jesus to the wind and the waves. That’s when he started to sink.

When life is hard, Jesus is still there. He is still right where He was before the storm blew in, but sometimes we let the storms of life distract us from how steady and sure He is. Or at least, I know I do.

When I stopped focusing on what was wrong, my whole attitude and outlook changed! I started to see that God had a bigger (and different) plan for me than the one I had been on for so long.

To avoid becoming a Mara when life is hard, be intentional about where your focus is. Shifting our focus back to Jesus is a small step that can have a big impact on the way we view our circumstances. Instead of being scared or bitter, with Jesus, we can remember that God is with us. Yes, life is hard, but we can take heart because He has overcome the world (John 10:10).

I mentioned that I had started going back to church and learning how powerful prayer was. I started praying every night.

But I wasn't praying in a selfish way, nor was I asking God to “get back” at the military or anything like that.

I simply thanked God every single day for the things He had already provided and asked Him for direction and wisdom.

And you know what?

I was able to find a job (at least for a short time) which enabled me to not end up homeless and living out of my car! He also set me on a path that, eventually, led me to do what I do today – sharing His message with the world as a blogger!

I can’t tell you why God answers some prayers so swiftly and other times He seems to remain silent. But I can tell you that I trust Him and believe in the power of prayer. And I also know that prayer will always bring us closer to the heart of God.

So, to avoid becoming a Mara when life is hard, pray. Pray for God to soften your heart. And pray for His guidance and wisdom and for you to receive it according to His will, not your own ideas of what should be.

3.) Recount The Deeds Of The Lord

If you’ve been a Christian for any length of time, you’ve probably heard someone say, “count your blessings.” However, tucked away in Psalm 118 is a different idea. Instead of counting his blessings, the author (most likely David) wrote, “I shall not die, but I shall live, and recount the deeds of the Lord” (ESV).

Now, I have to tell you; if you ever stop and recount the deeds of the Lord, it leaves you feeling pretty awesome. Kind of like you’re on top of the world. And the Bible is chock-full of examples of this.

The Psalms time and again tell of the creation of the Earth, or what God had done in the lives of the Israelites. It wasn’t until I started recounting God’s deeds on my own that I realized the significance though.

In order to avoid becoming a Mara when life is hard, try recounting the deeds of the Lord. If you go back to the beginning – retelling the story of creation and how God set the stars in place in your own words. It’s amazing.

You can also start with your own life story. Recount what God has done in your life or through your life. What He has done recently or what you have seen Him do in the lives of those around you.

Recounting the deeds of the Lord also helps shift your focus. It can lead you to pray or bring on praise and worship. In my own experience, it has never left me unmoved.

[bctt tweet=”Are you a Naomi or a Mara? When life gets hard, it can be so easy to let bitterness take over and keep you from enjoying the many blessings God has given you!” username=”kingdomblogger1″]

I know this can be somewhat of a hot topic, but it’s important if you don’t want to become a Mara. I already mentioned that I’ve been guilty of holding a grudge long after everyone else has moved on. So, this one is close to my heart.

When people do us wrong or hurt the ones we love, we must forgive them if we want to avoid becoming bitter. It has nothing to do with them, and everything to do with us.

I forgave those people in the military who were so cold to me when I needed them the most. I forgave them so I could move forward.

Sometimes forgiveness is like that. We have to forgive so we can move forward without becoming a Mara. Whether that’s with the situation we are in, or if we are moving into a new situation.

When I look back at Naomi, I look at all that she had to be thankful for.

Naomi said, “I went away full, and the Lord has brought me back empty” (Ruth 1:21a ESV). But she wasn’t alone. She had Ruth.

Naomi had a place to live. Apparently, she still had her husband’s land (Ruth 4:3). Yes, her heart was hurting, but she still had so much to be thankful for.

When I started focusing on my blessings, I quickly realized they far outnumbered my “curses.”

In order to avoid becoming a Mara when life is hard, every time something goes wrong, think of something to give thanks for. Yes, acknowledge that the situation is hard, but then remember that God is still good.

A while back, I found myself in a situation where a season in my life was coming to an end.  It was something I had invested so much of myself in it hurt to watch it fall away. But it felt like the choice was being made for me, and that stung.

Have you ever been there?

Have you ever felt like something you were invested in was being taken away from you?

Maybe you move to a different town. Maybe you switch jobs. Or maybe it’s something else. Whatever it is, it causes real grief.

And with that grief, there is a temptation to become a Mara.

I know because I have been there.

And can I just say that I wasn’t exactly quick to go through the five steps above?

I didn’t even realize I needed to at first. I just knew that I had lost something, and I was grieving. I didn’t realize I was becoming a Mara.

It’s what I did when I did make the connection that mattered.

So, if you’ve been there, or if you are there, I encourage you not to be too hard on yourself. It’s okay to grieve. But don’t let your grief turn into bitterness.

When life is hard, don’t say with Naomi, “Call me Mara,” instead, take heart because Jesus has overcome the world.

Have you found yourself becoming more of a Mara because of life's little detours? How did you come to realize it? What did you do to change it?

Be sure to read more about: