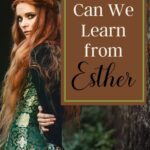 Who is Esther? You might have heard her name in a Sunday School lesson, a sermon, or in a Bible Study. She is, of course, a woman who lived in Old Testament times and there is a book of the Bible named after her.

She is famous for many reasons and we will look at the characteristics of Esther in the Bible that make her story an enduring and important one.

Contents hide
1 Who is Esther in the Bible
1.1 How Did Esther Come to Be the Queen of Persia
2 Characteristics of Esther in the Bible
2.1 Esther Submitted to God
2.2 Esther Had Wisdom
2.3 Esther Never Abused Her Authority
2.4 Esther Loved God
2.5 Esther’s Faith Was Strong
2.6 Esther Displayed courage
2.7 Esther Showed humility
2.8 Esther Had Patience
2.9 Esther Was a Team Player
2.10 Esther Understood Unity
3 Life Lessons from the Book of Esther
3.1 Esther Bible Study

Who is Esther in the Bible

Many have heard about a woman named Esther in the Bible but don’t really know much of her or her story.

Esther was an orphan who was being raised by her cousin, Mordecai. King Ahaseurus, the king of Persia at the time, reigned over 120 provinces from India to Ethiopia and he, along with Esther and Mordecai, lived in the capital city of Shushan.

Esther was an orphan who was being raised by her cousin, Mordecai. King Ahaseurus, the king of Persia at the time, reigned over 120 provinces from India to Ethiopia and he, along with Esther and Mordecai, lived in the capital city of Shushan.

In the following story, you will see what kind of woman she was through the characteristics that made her famous. Esther was a Jewish woman of faith who loved Mordecai and her people. She was no one prior to this story, just a simple Jewish woman living in Persia, but that all changed in a dramatic way.

How Did Esther Come to Be the Queen of Persia

Mordecai had raised Esther and was a leader of the Jewish people living in Shushan, the capital city of Persia. Esther loved and was committed to Mordecai, following his wise leadership.

King Ahasuerus, the king of Persia, was very wealthy and powerful and one day he decided to throw a party in his own honor! Queen Vashti, his wife, also threw a big party for the women in the royal palace at the same time. On the seventh day of his feast, “when the king was merry with wine” (Esther 1:10 NKJV), he ordered that Queen Vashti be brought to the feast so he could show off her great beauty. Queen Vashti declined the request!

Now, the King was humiliated and angry and dismissed Vashti as his wife. Not long after, the search for the new Queen began. The King’s people started gathering beautiful young women who willingly came to the palace. They were to be under the care of Hegai, and prepare themselves to eventually come before the King. Esther was one of those women.

She found favor with Hegai, and then spent one year being prepared to go before the King. There was a specific beauty ritual each woman had to complete before she could appear before the King.

Mordecai had instructed Esther not to tell anyone that she was a Jew and she did not. Mordecai checked on her every day because of his great love for this child he had raised.

The day drew near for Esther to go before the King and she knew that each woman who went in to be seen by the King was allowed to take whatever they desired in with them. Esther only took in what Hegai, her instructor, advised her to take.

King Ahasuerus immediately fell in love with Esther and she found favor with everyone including the king.

“And Esther obtained favor in the sight of all who saw her.” Esther 1:15b NKJV

“The king loved Esther more than all the other women, and she obtained grace and favor in his sight more than all the virgins; so he set the royal crown upon her head and made her queen instead of Vashti.” Esther 1:17 NKJV

Characteristics of Esther in the Bible

The story of Esther reveals a woman growing into her God-given role and becoming an example for the ages. The characteristics she models for us are:

Submission is a concept that has been sadly misused and abused in and outside the faith community. It has been twisted to mean that a woman has no choice or voice and must just silently obey her husband and even accept abuse. This isn’t what submission was ever meant to be.

Submission is voluntary and the person being submitted to has an obligation to lead in the likeness of Christ who never abused or exercised authority in the way we sometimes see it. Here, Esther demonstrates submission to Mordecai and he then operates in the kind of leadership that models Jesus.

Because Esther had submitted to someone who led by love, she was able to easily submit to God’s plan for her and to the King of Persia, who God had put into place.

Esther showed great wisdom in how she conducted herself and the plan she made to expose Haman’s true motives and evil heart. Haman’s pride was his downfall, but Esther said very little about him except for a few sentences revealing his plan.

Wisdom does not need many words to express itself.

Esther was the Queen of Persia, but she didn’t ‘lord it over’ her people. We see her giving a command to Mordecai, but it is a command to fast and pray. It is an unselfish command. She obviously knows the power of prayer combined with fasting, and she knows that the end result could be her own death. Still, she chooses to use her authority only for fasting and prayer.

Esther’s love for God, Mordecai, and her own people is so strong that she is willing to die with them rather live without them. Wealth, power, and position were nothing compared to the lives of her own people. She was willing to sacrifice everything for their sakes even though she had the power to do just the opposite.

Notice that she never questioned what Mordecai asked of her. They had developed a relationship based on love and trust – which, combined, generate faith. She knew Mordecai to be a man of wisdom and so she was willing to listen to and do what he asked. What he asked was never for selfish gain.

Esther clearly knew she could be killed for what she was going to do. She had the wisdom to go about it very carefully but, as she had seen with Queen Vashti, she knew that King Ahasuerus could change his mind about her at any moment.  Knowing all of this, she still moved forward.

Courage is not the absence of fear. Courage is the ability to act in spite of the fear. Esther was courageous because of her commitment and love for God and His people.

We see her humility with Mordecai and with the King. She never confronted Haman. She used her position for only one thing – to save her people and to defeat the enemy.

“Trust in Adonai with all your heart; do not rely on your own understanding. In all your ways acknowledge him; then he will level your paths. Don’t be conceited about your own wisdom;
but fear Adonai, and turn from evil.” Proverbs 3:5-7 CJB

“For I am telling every single one of you, through the grace that has been given to me, not to have exaggerated ideas about your own importance. Instead, develop a sober estimate of yourself based on the standard which God has given to each of you, namely, trust.” Romans 12:3 CJB

Wisdom is humble and these two verses show exactly how Esther lived in humility. She relied on prayer and fasting instead of her own wisdom. She feared God, not man. Her opinion of herself lay in her trust.

Another quality of Esther was patience. She took her time and carefully and prayerfully proceeded. A life lesson we need to be reminded of often is the need to exercise patience even when something seems to pressure us into instantaneous action.

Esther waited for a year, then for 3 days, and then for 3 more days in the midst of a highly dangerous situation. Her patience was combined with wisdom and the enemy was defeated.

Esther Was a Team Player

Esther and Mordecai worked together. Their teamwork was based on mutual trust and faith. Both were Jews who served the same God with the same faith.

Both trusted. Mordecai made a request of Esther and she trusted him. She gave a command to Mordecai and he trusted her. They both trusted their God as evidenced by the prayer and fasting that preceded the actions.

Esther and Mordecai had unity, exactly what Jesus prayed for His disciples to have in John 17:11, 21-23. We are to live in unity through Christ and the indwelling Holy Spirit.

Life Lessons from the Book of Esther

These ten characteristics of Esther are all the things we can learn to exercise in our daily lives. Esther gives us life lessons by being a living example of the characteristics that will bring us through our battles and into victory over the enemy.

I pray that you read and study the Book of Esther. It is an exciting adventure in faith that will inspire you to live like Esther!

If you want to dive deeper into the story of Queen Esther, here are a couple of really great Esther Bible studies you might want to check out:

Fleda, founder of Women Ministering and Study Your Bible Now has a passion to see women excel in life and in their service to the Kingdom of God by providing resources, connections, and support.