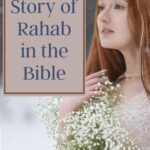 The story of Rahab in the Bible has long been one of my favorites, her story of redemption and salvation, along with her courage, wisdom, and faith are striking examples of what can do in the lives of ordinary people. It’s a living testament of the power of our God, and how He can use even the messiest of histories for an incredible purpose.

Who Was Rahab in the Bible

Rahab in the Bible was a Canaanite woman living in Jericho, the Bible tells us that she was a prostitute. We are told that she lived on her own in a home built into the walls of the city. These are the only real details that the Bible gives us of her story before her encounter with the Israelite spies.

Where in the Bible is the story of Rahab?

The story of Rahab in the Bible can be found in Joshua 2, though she is mentioned quite a few times throughout the Bible as a picture of faith and courage:

Then Joshua son of Nun secretly sent two spies from Shittim. “Go, look over the land,” he said, “especially Jericho.” So they went and entered the house of a prostitute named Rahab and stayed there. The king of Jericho was told, “Look, some of the Israelites have come here tonight to spy out the land.”

So the king of Jericho sent this message to Rahab: “Bring out the men who came to you and entered your house, because they have come to spy out the whole land.” But the woman had taken the two men and hidden them. She said, “Yes, the men came to me, but I did not know where they had come from. At dusk, when it was time to close the city gate, they left. I don’t know which way they went.

Go after them quickly. You may catch up with them.” (But she had taken them up to the roof and hidden them under the stalks of flax she had laid out on the roof.) So the men set out in pursuit of the spies on the road that leads to the fords of the Jordan, and as soon as the pursuers had gone out, the gate was shut. Joshua 2:1-7 NIV

Rahab took a chance and hid these men on her roof and then sent the soldiers in a different direction. If the soldiers had found them, she and possibly even her family would have been in serious trouble. But somewhere along the line God had been working on her heart so that when these men arrived, she would be ready and willing to step into the role God had for her.

Before the spies lay down for the night, she went up on the roof and said to them, “I know that the Lord has given you this land and that a great fear of you has fallen on us, so that all who live in this country are melting in fear because of you. We have

heard how the Lord dried up the water of the Red Sea for you when you came out of Egypt, and what you did to Sihon and Og, the two kings of the Amorites east of the Jordan, whom you completely destroyed. When we heard of it, our hearts melted in fear and everyone’s courage failed because of you, for the Lord your God is God in heaven above and on the earth below.

Rahab knew what was coming because the Lord had been working on her heart, she knew that the Lord had already given this city to them. She’d seen the fear envelop her neighbors as the Israelites had victory after victory, and yet this fear has drawn her heart toward God.

“Our lives for your lives!” the men assured her. “If you don’t tell what we are doing, we will treat you kindly and faithfully when the Lord gives us the land.” So, she let them down by a rope through the window, for the house she lived in was part of the city wall.

She said to them, “Go to the hills so the pursuers will not find you. Hide yourselves there three days until they return, and then go on your way.” Now the men had said to her, “This oath you made us swear will not be binding on us unless, when we enter the land, you have tied this scarlet cord in the window through which you let us down, and unless you have brought your father and mother, your brothers and all your family into your house.

If any of them go outside your house into the street, their blood will be on their own heads; we will not be responsible. As for those who are in the house with you, their blood will be on our head if a hand is laid on them. But if you tell what we are doing, we will be released from the oath you made us swear.” “Agreed,” she replied. “Let it be as you say.” Joshua 2:14-21 NIV

Who Did Rahab Marry?

Rahab married a man named Salmon of the tribe of Judah, it’s believed that he was one of the spies that she hid on her roof in Joshua 6. Salmon is not mentioned in the Old Testament it’s only in the New Testament when Luke and Matthew present the ancestor of Christ do, we discover what happened to Rahab, and who she ended up marrying.

Who Are the Descendants of Rahab?

Rahab is one of only 5 women mentioned in the genealogy of Christ. The book of Matthew gives us a great snapshot of the direct decedents of Rahab and Salmon:

That’s a lot of really hard to pronounce names I know, but they are important because Rahab’s children and grandchildren went on to do great things. And through this line, the whole world was impacted. Some of the biggest names that pop out of this list:

Characteristics of Rahab in the Bible

Rahab in the Bible is a striking character who stands as an example to all of us of what God can do in the life of one woman. And she has so many characteristics that we should all strive to emulate as followers of Christ.

Rahab Was a Woman of Courage

Rahab shines through scripture as a woman of courage as she acted to protect the spies hiding and her family. Despite the consequences of her actions, she acted with courage and wisdom.

Rahab Was a Woman of Faith

Rahab had heard the stories of what the God of Israelites had done, something in her heart had shifted so that when the Israelite spies arrived, she declares “I know that the Lord has given you this land”.

Something in the heart of this Idolater woman had broken away and her faith is now In the God of Israel. Because of this woman’s faith, her entire family was saved.

Rahab worried about her family and asked that the Israelites spare them. Not only was she a courageous woman of faith willing to risk her life to hide these spies she was willing to put her life on the line to save her family.

Rahab Was a Shrewd Woman

Rahab was shrewd and hid the Israelite spies on her roof, and then telling them to hide in the hills before returning to Joshua. She was a woman who planned ahead. She knew the politics of her town, the region and terrain, and the king.

She was familiar with what the Israelite’s and their God have been doing. Rahab is smart, intelligent and aware of what’s going on around her.

Rahab Was a Good Mother

Rahab was a mother who raised her son Boaz to be a righteous man and considerate and later to be the wife of Ruth. Her legacy lives on to this day through the lineage of Christ to impact the world.

Rahab in the Bible turned away for the gods of her people and put her faith in the one true God, the God of Israel. She feared God because she knew of His power and faithfulness to His people.

Rahab feared God more than the power of an earthly king, she knew that this city had already been given over to the Israelites and it was only a matter of time before it fell.

Rahab Was a Woman of Her Word

Rahab was a woman of her word, she didn’t turn in the spies that she hid in her home, nor break her promise to gather her family and keep them in her home while hanging a scarlet cord from the window to mark her home.

What Can We Learn From Rahab?

There are so many lessons to be gleaned from this woman of the Old Testament, so many pearls of wisdom that we could glean from the story of Rahab in the Bible.

She shows us that God Hears Our Prayers. Rahab was heard by El Shama, the God who hears me, God heard Rahab and kept His promise to Rahab. When the walls of Jericho fell her home and family remained safe inside until the spies, she had saved arrived to escort them out.

While all the other walls fell, the section containing her home remained standing. I’m reminded of the time God placed Moses in the cleft of the rock and covered him with His hand, God covered Rahab in the Bible with His hand and protected her.

Rahab is a wonderful example that we should be courageous and faithful to our God even when the price is high. God is always in control, even when we can’t see how the walls of Jericho can be breached, or how our family will be safe inside those walls.

The story of Rahab in the Bible shows us that no past is too bad, no mistakes to bold to keep our God from using us. Her lineage literally leads to the birth of the Messiah! God has a history through the Bible of using imperfect people to impact the world.

Read about more amazing women of the Bible: