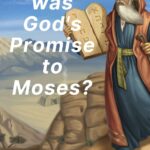 Moses began as a reluctant leader. Often when God gives us a job to do, we doubt our qualifications or abilities.

Moses was no different. God’s promise to Moses came first when God called him to be a leader.

He tried to talk God out of that responsibility. Once he embraced those personal promises, he was ready to lead the people of Israel out of their bondage into a new geographical location, as well as a new relationship with God.

God’s Promise to Moses as a Leader

Though raised in a royal family and educated by the best of the best, Moses lacked confidence in his abilities. He was taken back when God called him personally to lead the Israelites out of their slavery in Egypt.

Moses had the same objections that many of us have today.

These objections were all based on his perceived lack of abilities. They did not take into account that the God who created him was the one asking him to do this job.

Isn’t that the way we are sometimes? We act as if the outcome of everything depends on us. We forget that “If God is for us, who can be against us?” (Romans 8:31)

God made some very specific promises to Moses regarding the job he was called to do.

We too can count on God to meet us where we are. Whatever weaknesses we possess, He will use for His glory.

God’s strength is made perfect in our weakness. (2 Corinthians 12:9) It was true back when God made His promise to Moses and it is still true today.

God’s Promise to Moses in His Covenant

What did God promise Moses in His Covenant?

With God’s direction and empowerment, Moses went on to lead Israel on a journey to freedom from slavery in Egypt.  Along the way, they witnessed the power of God through many miracles.

It was on that desert journey that God gave to Moses further promises for all the people under his leadership. It is often called the Mosaic covenant.

The word covenant is rarely used today. They were business transactions that people made long before Abraham, Isaac, Jacob, or even Moses arrived on the scene.

Covenants were a natural part of life during that time in history. Today we call them contracts, and as such, each party has a responsibility.

So what did God promise Moses in His covenant? Here are some highlights.

God’s people would be a treasure to Him.

Down through the ages, many people have searched for “treasures”. Their thoughts were obsessed with it as it was “highly valued“. Some even lost their lives in pursuit of it.

A treasure, my friend, is what we are to God when we love Him and obey Him. We are valued and blessed above all of the rest of God’s creation.

“Now therefore, if you will indeed obey my voice and keep my covenant, you shall be my treasured possession among all peoples, for all the earth is mine;” Exodus 19:5 ESV

They would have a unique relationship with God.

They were compared to priests who were the only ones allowed to meet God in the temple.

Today, it would be like having access to royalty. Imagine rubbing shoulders with Queen Elizabeth II of the United Kingdom and Head of the Commonwealth of 14 other nations.

What a great promise and privilege, to be close to the King of the universe!

They would have God’s protection.

When Israel was trying to settle into their newly acquired land, they had many neighbors who were less than friendly. In fact, without God’s protection, they never would have become an established nation.

Though less in number, Israel’s military strength was a direct result of God’s protection. Surrounding nations soon learned to respect the God of Israel.

“But if you carefully obey his voice and do all that I say, then I will be an enemy to your enemies and an adversary to your adversaries.” Exodus 23:22

God would give them mercy and grace.

Mercy is not getting something we deserve. When we sin, we deserve punishment. But mercy does not dole out that punishment. God is slow to anger, giving people many chances to confess and turn from their sin.

Grace is getting something we don’t deserve. We can’t earn God’s love or His forgiveness. Likewise, we can’t earn His blessings, which are many. Yet we are promised all of it when we love God enough to obey Him.

“The Lord passed before him and proclaimed, ‘The Lord, the Lord, a God merciful and gracious, slow to anger, and abounding in steadfast love and faithfulness, keeping steadfast love for thousands, forgiving iniquity and transgression and sin … ‘ ” Exodus 34:6-7

The Importance of God’s Promise to Moses

Why was God’s promise to Moses so important?

Both covenants are based on the confession of sin and obedience to God. It is a given that people will sin no matter how much they try not to.

We live in a fallen world and we succumb to the many temptations that come from within ourselves and from the ultimate enemy, Satan.

God’s promise to Moses taught people what sin was and paved the way for understanding God’s plan of salvation.

When the Israelites were traveling from Egypt to the promised land, they were given the Mosaic covenant, which included the laws they were to obey.

Jesus summed up all of the law into two simple commands. We should love God, and love people (Matthew 22:37-40).

When that is our desire and goal, we too can be God’s treasure, have a unique relationship with Him, have protection against Satan, and receive mercy and grace.

God cared so much about mankind that He gave us a way to have a relationship with Him. What a blessing when long ago a covenant was made!

Be sure to read more about how to stand firm on God’s promises!

Sandy is an ordinary farm girl who has been through many difficult life circumstances. At The Creator's Classroom, she frequently discusses real-life disappointments and how to rise above them. Her passion is to help her readers know Jesus and in Him find their hope, joy, and peace.