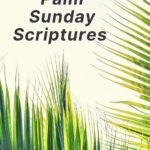 If you are interested in having a deeper study this Easter, then may I recommend you come along on this study of Palm Sunday scriptures to grow your faith and begin your meditation on Jesus’s greatest gift to you.

The setting is the final week of Jesus’s life, the climax of his time here on earth.  The air is full of anticipation, awe, and wonder as Jesus had just raised Lazarus from the dead.  People are praising God, excited by the miracle and the possibility of a redeemer.

Surely, he would free them from Roman occupation now.  This must be the long-awaited for Messiah, king of the Jews, deliverer of Israel.  Who else had the power to bring someone back from the afterlife?

What other man had the connection with the great Elohim to heal the blind, restore health, and cast out demons?

The people hail Jesus as king as he enters Jerusalem.  They take palm branches and go out to meet him, shouting,

A very large crowd spread their cloaks on the road, while others cut branches from the trees and spread them on the road. The crowds that went ahead of him and those that followed shouted,

The air is filled with anticipation, but Jesus’s anticipation is a bit different.  He knows that in five short days, his true calling would be fulfilled.  He also knew that these people had no idea that he had come to deliver them from sin and death, the power satan had over God’s creation.

He would free them, deliver them, like never before.

What is the Spiritual Meaning of Palm Sunday

So, what is the spiritual meaning of Palm Sunday?  Why is it significant to study?

Like so many other aspects of Jesus’s life, Palm Sunday is prophesied in the Old Testament.

Rejoice greatly, Daughter Zion!  Shout, Daughter Jerusalem! See, your king comes to you, righteous and victorious, lowly and riding on a donkey, on a colt, the foal of a donkey.  (Zechariah 9:9)

The people are even quoting prophecy in their exaltation of Jesus.

Jesus was crowned king that day by an excited group of Jews.  They knew the scriptures, but they didn’t understand exactly how they would unfold.

In a much later dispensation, Jesus will reign physically as king of kings (Isaiah 11), but for the crowd gathered together that day and for us today, Jesus’s kingship is one we take up in our own hearts and lives.

This is a similar concept to the prophecy from Isaiah 9:6 of Jesus being declared “Prince of Peace” in which we learn that true peace comes only from reconciliation with our creator and not peace in a political sense.

This hailing of Jesus as king, is also meant to be king of our hearts until he reigns as physical king.  When we allow him to rule our hearts and lives, when we live in obedience to his words, and reverence him above all else, he is indeed king.

Let’s dig into scripture now and pray that God makes these verses real to us.  They are the living word of God, applicable to us in every stage and season of life.  Embrace Jesus as your king and put your trust in the only true source of peace.

When he came near the place where the road goes down the Mount of Olives, the whole crowd of disciples began joyfully to praise God in loud voices for all the miracles they had seen:

“Blessed is the king who comes in the name of the Lord!” “Peace in heaven and glory in the highest!”

Some of the Pharisees in the crowd said to Jesus, “Teacher, rebuke your disciples!” “I tell you,” he replied, “if they keep quiet, the stones will cry out.”

Then Mary took about a pint of pure nard, an expensive perfume; she poured it on Jesus’ feet and wiped his feet with her hair. And the house was filled with the fragrance of the perfume.

But one of his disciples, Judas Iscariot, who was later to betray him, objected, “Why wasn’t this perfume sold and the money given to the poor?

It was worth a year’s wages. He did not say this because he cared about the poor but because he was a thief; as keeper of the money bag, he used to help himself to what was put into it.

“Leave her alone,” Jesus replied. “It was intended that she should save this perfume for the day of my burial. You will always have the poor among you, but you will not always have me.”

After this, I looked, and there before me was a great multitude that no one could count, from every nation, tribe, people, and language, standing before the throne and before the Lamb.

They were wearing white robes and were holding palm branches in their hands. And they cried out in a loud voice: “Salvation belongs to our God, who sits on the throne, and to the Lamb.”

Jesus answered, “I am the way and the truth and the life. No one comes to the Father except through me.

As they approached Jerusalem and came to Bethphage on the Mount of Olives, Jesus sent two disciples,  saying to them, “Go to the village ahead of you, and at once you will find a donkey tied there, with her colt by her.

Untie them and bring them to me.  If anyone says anything to you, say that the Lord needs them, and he will send them right away.”  This took place to fulfill what was spoken through the prophet:

“Say to Daughter Zion, ‘See, your king comes to you, gentle and riding on a donkey, and on a colt, the foal of a donkey.’”The disciples went and did as Jesus had instructed them.

They brought the donkey and the colt and placed their cloaks on them for Jesus to sit on.

Fight the good fight of the faith. Take hold of the eternal life to which you were called when you made your good confession in the presence of many witnesses.

In the sight of God, who gives life to everything, and of Christ Jesus, who while testifying before Pontius Pilate made the good confession, I charge you to keep this command without spot or blame until the appearing of our Lord Jesus Christ, which God will bring about in his own time—God, the blessed and only Ruler, the King of kings and Lord of lords, who alone is immortal and who lives in unapproachable light, whom no one has seen or can see.

But about the Son he says, “Your throne, O God, will last forever and ever; a scepter of justice will be the scepter of your kingdom.

You have loved righteousness and hated wickedness;  therefore God, your God, has set you above your companions by anointing you with the oil of joy.”

And I saw what looked like a sea of glass glowing with fire and, standing beside the sea, those who had been victorious over the beast and its image and over the number of its name.

They held harps given them by God and sang the song of God’s servant Moses and of the Lamb: “Great and marvelous are your deeds, Lord God Almighty.  Just and true are your ways, King of the nations. Who will not fear you, Lord,  and bring glory to your name?

For you alone are holy. All nations will come and worship before you, for your righteous acts have been revealed.”

And let us run with perseverance the race marked out for us, fixing our eyes on Jesus, the pioneer and perfecter of faith. For the joy set before him he endured the cross, scorning its shame, and sat down at the right hand of the throne of God.

So Pilate asked Jesus, “Are you the king of the Jews?” “You have said so,” Jesus replied.

His beginning was humble, born in a stable, to poor parents.  He most likely worked side by side with his earthly father learning the trade of a carpenter.  His neighbors thought little about him and most likely didn’t expect him to amount to much.

For the unbelieving eye, he didn’t amount to much.  A man with a ministry that stirred up the people, but ended with a humiliating death on a cross.  The end of a ministry before it truly began.

For those who believe, we know that he was so much more.  But, how could I talk in the past tense?  He IS so much more because even now he stands before God making intercession for us (Hebrews 7).

That devastating day on the cross was not the end.  The dreams of the people had been fulfilled, but in a way that was different than what they anticipated.  Jesus is coming back as King of kings and I don’t know about you, but I plan on being ready when he returns.

May these Palm Sunday verses become a part of you as you study them and determine in your heart to be ready when he returns.