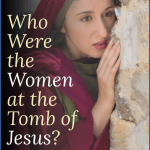 Who were the women at the tomb of Jesus?

Why were these women chosen to witness this amazing and life-changing event? Why were His disciples (the men) not the ones to see it happen?

The truth is God chose these women to bear witness for a reason!

The Women at the Tomb Found It Empty

They were up and on the path to the tomb before daylight. (Matthew 28:1) Maybe they hadn’t slept at all.

Perhaps after the umpteenth cup of coffee, one of them said, “Since we’re not gonna sleep, let’s just go ahead and do what needs to be done.”

Who Were the Women at the Tomb of Jesus?

Who were the women at the tomb when Jesus died and rose again?

Mary {the mother of Jesus) and Mary Magdalene (the one who’d been a prostitute before she met Jesus) are two of the women who went to the tomb and found it empty. There were at least two other women as well.

They were women on a mission. They carried spices (apparently to mask the odor of a decaying body) along with whatever else it took to prepare Jesus’ body for burial.

The Bible says they were thinking about the huge stone that had been rolled into the opening of the tomb. It weighed over 1000 pounds.

Who would move it? As strong as these women were, they weren’t physically able to roll a stone that big out of the way. And there were armed guards stationed at the tomb.

The Women at The Tomb Saw Victory

Sometime before the women made their way to Jesus’ tomb the Bible says there was a violent earthquake.

After the Sabbath, at dawn on the first day of the week, Mary Magdalene and the other Mary went to look at the tomb. There was a violent earthquake, for an angel of the Lord came down from heaven and, going to the tomb, rolled back the stone and sat on it. 3 His appearance was like lightning, and his clothes were white as snow. 4 The guards were so afraid of him that they shook and became like dead men. Matthew 28:1-4 NIV

The angel rolled the stone away and then he sat on it.

The angel didn’t roll that stone away to let Jesus out. He didn’t need to. Jesus’ resurrected body could pass through walls.

The angel rolled the stone away so that whoever came to the tomb would find it empty.

What The Women at the Tomb Saw and Heard

The angel said to the women, “Do not be afraid, for I know that you are looking for Jesus, who was crucified. 6 He is not here; he has risen, just as he said. Come and see the place where he lay. Matthew 28:5-6 NIV

I’m not sure the angel was implying “I told you so,” but it kind of sounds like it. It sounds a little like he took a jab at the women when he said, “Just as He said…”

After all, Jesus had spoken of His upcoming death many times. But He’d always added that His death wouldn’t be final.

I’ve doubted the Lord many, many times.  And each time I’ve found myself in either awe or deep sorrow. On the other side of each doubt God has said to me, “You see, I’ve have done exactly what I said I would do” or “I have been exactly who I said I am.”

I think that’s what the angel was implying. We can trust God. Always.

When we hear and understand the truth of the gospel, the next thing we should do is go and tell. Keeping it to ourselves is simply wrong. Why would we not be willing to share the greatest news the world has ever known?

How touching that God sent the women to the disciples.

The men had all deserted Jesus. Every last one of them! But the women at the tomb believed and were faithful!

That’s how good God is to those of us who are unfaithful.

Why Were Women The First at the Tomb And Found It Empty?

How touching and how like Jesus to choose women to see the miracle of the Resurrection first. Maybe to make it clear that, although society reckoned them second-class, God never did.

Or maybe because if men were the ones who went to the tomb and found it empty they’d be more likely to stand around and try to make sense of things.

Women, on the other hand, would call, text, or post it on Facebook. And then form a Bible study!

The angel made sure the women at the tomb understood that Jesus had indeed been crucified. And now He had risen from the dead.

In other words, Jesus was resurrected.

So was the son of the widow Elijah brought back to life. Those people stayed in the same bodies they’d had before they died. And their bodies eventually died again.

Jesus was resurrected. That means He received a new body designed for eternity. When we’re resurrected, we’ll have one of those too.

When the women at the tomb departed, they left with fear and great joy. (Matthew 28:8)

What does this combination of fear and great joy feel like?

On their way to tell the disciples, the women didn’t talk to each other or compare stories.

Surely the news was too much to try to express at that point. They had one thing on their minds:  go and tell.

John got there first, probably because he was the younger one. He didn’t go in right away. Perhaps he looked in, saw the grave clothes and assumed the body was still there.

After all, the scriptures say the disciples didn’t yet understand that Jesus would rise from the dead. So the thought of a resurrected body at that point was absurd.

When Peter entered the tomb, he believed. Then John entered, looked again, and believed also.

The Women at the Tomb Observed A Life-World-Changing Moment

After the disciples returned home, Mary Magdalene stood outside the tomb sobbing. According to the account of the empty tomb in John, two angels appeared and asked her, “Why are you crying?” In other words, “Why aren’t you rejoicing?”

In most biblical accounts when people see angels they’re terrified and speechless.

Mary was grief-stricken. Even the trauma of seeing an angel barely registered with her. She answered him as though he were asking if she’d like cream in her coffee.

Then she heard her name.

Mary was in a fog. Nothing made any sense. She saw someone there but she couldn’t make out who it was. All she knew was that Jesus was gone, and she was filled with numbing grief.

Then she heard Jesus speak her name and everything changed. She knew it was Him.

She saw the Lord! And she couldn’t wait to tell others.

The Good News is the Empty Tomb

When the women went to the tomb and found it empty they weren’t thinking about the Resurrection. Neither were the disciples. The Bible is clear they didn’t yet understand that Jesus would come back to life and victoriously conquer sin and hell.

At that point, they couldn’t comprehend that the souls of men would find redemption and eternal life because of the events that were unfolding before them.

All they knew at that point was Jesus is gone. And they were grieving. Because they desperately wanted Him back.

That’s the really good news of Easter that we don’t focus on enough.

The Resurrection of Jesus Christ is not just a nice Easter story. It’s a fact. It’s history.

And the good news of Easter is the same news that made the women and disciples who went to the tomb and found it empty deliriously happy.

The good news of the Resurrection isn’t reserved for heaven.

He lives in us NOW.

A few women and disciples turned the entire world upside down because the news about Jesus was so good they couldn’t keep it to themselves.

Is He alive in you?

As a long-time Bible teacher, Cindy takes the instruction to mature women in the book of Titus to heart. Known as a lover of lipstick and her Bible, she uses biblical truth to encourage other women at her blog The Titus Woman. For years Cindy navigated life as a mom of three daughters while her husband worked at an overseas job. Today she uses her story as a testimony that when life is crazy, God is faithful. When not writing or teaching, Cindy can be found flipping houses with her husband, doing a lot of Disney with her three daughters, or planning an annual cousin camp for her eight grandchildren. You can connect with her on Twitter, Instagram, and Pinterest.