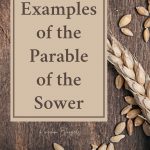 The Parable of the Sower is a story most Christians are familiar with. But how do we apply these parables to our lives now?

Jesus based His parables on the customs at that time.  In the case of the parable of the sower, farming was something His disciples knew.  But farming isn’t something the majority of us are familiar with today, so how do we apply these principles to the things we are familiar with in our lifetime?

What is the Parable of the Sower

On the surface, the Parable of the Sower seems to be about dirt and spreading the Gospel to others. However, if you dig deeper, you’ll come to understand that it also applies to our lives after we’re saved and the influences that pop up that separate us from fulfilling our calling, to love others, and to share the great commission.

“And he told them many things in parables, saying: “A sower went out to sow.  And as he sowed, some seeds fell along the path, and the birds came and devoured them.  Other seeds fell on rocky ground, where they did not have much soil, and immediately they sprang up, since they had no depth of soil,  but when the sun rose they were scorched. And since they had no root, they withered away.  Other seeds fell among thorns, and the thorns grew up and choked them.  Other seeds fell on good soil and produced grain, some a hundredfold, some sixty, some thirty.  He who has ears, let him hear.” Matthew 13:3-9 ESV

Whereas today, we prepare the soil, then plant, in those days, the seed was first scattered, then tilled into the ground. So here we have the sower of seeds.  As he scattered them, they landed in four different types of ground:

What is the Main Message of the Parable of the Sower?

What happened to the seed when it fell upon each of these places?  Jesus goes on to tell us in Matthew 13:19-23

Seed scattered by the wayside represents some of  those who hear the Word of God. Either they aren’t interested, or they hear it with a hardened heart. When that happens, the enemy swoops in and snatches the Word away, so it doesn’t penetrate into the heart of the listener.

Matthew 13:19 “When anyone hears the word of the kingdom and does not understand it, the evil one comes and snatches away what has been sown in his heart. This is what was sown along the path.”

Seed scattered on stony places represents those who, when they hear the Gospel, are excited and they respond well. However, when tribulation comes, their excitement is gone because they aren’t willing to endure the trials for the sake of Christ.

It’s not that they lost their salvation because we know that’s not possible.  Instead, they didn’t fully trust the Lord to begin with.

“As for what was sown on rocky ground, this is the one who hears the word and immediately receives it with joy,  yet he has no root in himself but endures for a while, and when tribulation or persecution arises on account of the word, immediately he falls away.” Matthew 13:20‭-‬21 ESV

Seed scattered among the thorns landed on fertile ground. But it was so fertile, that not only was the Word of God received, so was every other worldly idea.  In this manner, the things of this world, like cares and riches, were more important, and unfortunately choked out the Word.

“As for what was sown among thorns, this is the one who hears the word, but the cares of the world and the deceitfulness of riches choke the word, and it proves unfruitful.” Matthew 13:22 ESV

Seed scattered on good ground pertains to a really good crop. These are people who hear the Gospel, believe it and turn their lives over to the Lord and bear good fruit.  These are the truly saved.

The fruit they bear comes in different proportions,  some thirty or sixty or a hundred fold. The point is, we know they belong to the Lord because they show it.

“As for what was sown on good soil, this is the one who hears the word and understands it. He indeed bears fruit and yields, in one case a hundredfold, in another sixty, and in another thirty.” Matthew 13:23 ESV

What is the Secondary Message of the Parable of the Sower?

We know that the Parable of the Sower is about sharing the Word of God with everyone.  But Jesus also wanted us to learn and grow in our own lives through this parable.

Don’t we all experience different types of soil in our lives that can prevent us from sharing the Gospel? When that happens, it interferes with our ability to witness to others.

The seed sown by the wayside, where people walk, has gotten trampled down and possibly not so important in our lives. That means that we are no longer a great example to others.

Seed sown in the stony places, where soil was thin, means we know the basics,  but we’re not rooted and grounded in the truth. We’re all talk, no action. For example, I may tell you all day about how much faith I have. But when something happens in my life, my faith waivers.

Seed sown among thorns, where thorns and weeds choke out the good seed.  This means that although we know the truth, we’re so wrapped up with worldly things that we aren’t living Godly lives. We aren’t interested in spiritual growth or a relationship with Jesus.

But seed sown on good ground in our lives, is when we are planted firm in God’s truth. We are showing our faith, producing good fruit and sharing the Gospel with others. This is where we need to be.

Modern Day Examples of the Parable of the Sower

How Does the Parable of the Sower Relate to today?

Basically, when we know God’s Word,  but we get distracted by the news, riches, or noise that the enemy tempts us with, that it replaces the goodness of the Gospel.  This distraction sucks us in and we forget that all we need to do is turn our eyes upon Jesus.

Let’s take a look at some modern day examples of the parable of the sower.

This is the story of the writer who used social media as a way to spread the Gospel message. There were so many people on social media that it seemed like a great place to share the wonderful news of Jesus.

Every day the social media sower would scatter posts about the Lord. If he threw out enough seed, he should be able to reach people.  The seed sown by the wayside where people scrolled, attracted a few people, but the enemy came along and contradicted the message. Some were easily swayed from the Gospel seed that was sown in their heart.

Next we have the social media sower scattering seed on rocky ground. There were people who heard the Word and excitedly received it and endured it for a while. But another post about tribulation for Christians was shown in their feed. As his faith was built on shallow, rocky ground, he was unwilling to stick with it. The seed that was scattered among the thorns, became that newborn babe in the Word, however he was easily distracted by improper jokes and promises of a get rich quick scheme.

But finally, what was sown on good soil, landed among those whose heart was open and searching for God, salvation and peace in their hearts. They got off of social media and spent their free time in God’s  Word. They found a local New Testament church, and began fellowship with other born-again believers who helped them in starting the seed sowing process all over again.

Now, let me share with you the story of the college student sower.  This young disciple of Jesus was excited to head off to college, wearing the full armor of God.  She was so excited. It was her freshman year and a new convert for the Lord. She was going to be exposed to so many new people at her new school and she saw the fields white for harvest.

A passionate young lady, who shared her love of God with everyone. Her new friends would listen, but the seed scattered by the wayside fell on deaf ears. So the seed was quickly swept away by the newness and excitement of being at school and living away from home.

As our college student continued with her goal of spreading God’s Word, she found some friends who received it well. They were super excited. But when mid-term exams came and with the stress of school was laid upon them, the seed scattered on stony ground chose ulterior methods to cope, rather than lean on their faith in the Lord.

Our passionate disciple decided to focus her energy on her science class. She figured that these folks were smart and the Gospel of Jesus would make perfect sense to them. Her seed scattered among the thorns, landed on fertile ground. However the ground was so fertile that although her friends were excited to discuss Scripture with her, the excitement wore off as the science students were distracted with ideas like the theories of big bang and evolution.

The seed that our student had sown on good ground yielded some lifelong friends, who turned their lives over to Jesus. She now had friends that she could study with and together they would be able to bear good fruit. She invited them to be baptized and join her local New Testament church where they served God and His people to carry out the great commission to more people as we are all called to do.

It is very important that we share the Gospel as often as we can. As you can see, the seeds we scatter on behalf of Jesus all have different results.  But even in planting seeds in our garden, some seeds get eaten by birds, some fall on stony ground and get scorched by the sun. Some seeds planted in rich soil, have weeds that grow right alongside them and choke them out so they die.

But some seeds take root and grow into big beautiful crops that feed your family. Like a garden that needs seeds to feed our families, we must scatter seeds of the Gospel of Jesus. Not everyone will receive the message with an open heart.  But some will.  Our job is not to decide who gets to hear the message, but we are called to serve. So scatter those seeds my friend.

For a long time, the parables that Jesus told us were really confusing to me. Plus, I never really understood why He spoke in parables. But over time and in the process of digging into the Word of God more and more, I’ve come to better understand more of His parables.

Wendy Wallace is a wife, mom, Christian Inspiration blogger, and author. She is also a quadruple amputee. You can find her at One Exceptional Life, where she blogs about Overcoming Challenges, Positivity, Christian Living and Amputee Life. You can also connect with her on social media at Facebook, Instagram, Twitter, and Pinterest.