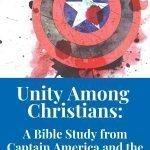 I am a huge fan of the MCU and the entire story line that plays out in the Avengers and Guardians of the Galaxy movies. Any mom with tween or teen children (or maybe a husband) has undoubtedly been exposed to this saga for many years. Although I do have teens and an adult son, I actually really got into this entire story. While many Christian parents may have concern over their kids somewhat idolizing these characters, I’ve found it a perfect opportunity to teach about Jesus.

Wait. What do the Avengers have to do with Christianity and unity among Christians?

While these movies are definitely not centered around anything related to being a Christian, they do provide excellent correlations that can turn pop-culture into a Bible study that they’ll understand and totally be able to relate to. 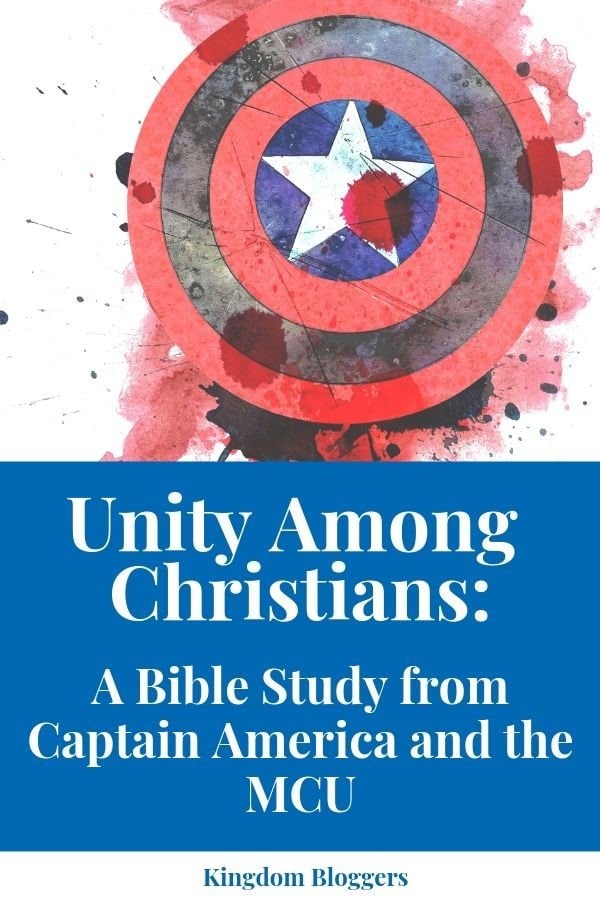 1 When We Lack Unity Among Christians
1.1 The Enemy Wants to Divide Us
1.2 Uniting Despite Our Differences
2 We Are Better Together

When We Lack Unity Among Christians

It’s no secret that the enemy – Satan – is out there plotting all sorts of ways to keep people from inheriting the Kingdom of God. As Christians, we must always be alert and guard our hearts to prevent evil from getting into it. Generally speaking, we are looking for external signs of the enemy attacking. Because we are on alert for outside influences, we often don’t realize that his attacks might be coming from within our very own family! His best strategy is to break apart the unity among Christians.

Did you watch Captain America Civil War? This movie really drove the concept of the enemy turning us on each other. If you haven’t seen it, the short version is that the bad guy wants to take down the entire Avengers Initiative. Instead of trying to outright assassinate each of them, he decides to plant seeds of doubt among each of the members about different things. Actually, before this particular bad guy came into the picture, there was this whole “Accords” thing that had already created a divide among them so him adding to the friction ended up with them actually fighting each other at the end of the movie. The bad guy actually spells out his strategy which was to let them turn on each other so the initiative would implode on its own.

This is already happening among Christians!! Just last month there was this huge uprising on social media (which is another playground for the devil) because the pastor of a church prayed over our President. If that isn’t some spiritual warfare, I don’t know what is! As a result of this event, many of his own congregation lashed out at him. Christians across the planet took to social media about it. You had Christians being hateful to other Christians – creating “sides” over this debate.

And Satan is over on the sidelines sipping his drink with a smile on his face (and barely even having to lift a finger)!

The Enemy Wants to Divide Us

I think pretty much any Christian who has been reading the Bible for any amount of time can readily cite a few verses about prayer. And for the newer Christians who are still learning the Bible, we can easily look them up – and there are plenty of them that confirm the appropriateness of the pastor praying over him. But the seeds of the enemy that had already been spread through the internet by the political debates had already laid a foundation that disrupted our family ties (as Christians).

Seriously yall! When Christians start arguing over the appropriateness of PRAYER – you must take a step back and come to the realization that you are smack dab in the middle of a spiritual battle on a whole other level! The best way to stop Christians from spreading the good news is to simply divide the unity among Christians. Create an “us” vs “them” mentality where we are no longer fighting on the same side.

Instead of focusing our eyes on God, many have allowed the enemy to refocus their sight on other things (like hating the President) which takes them further from the biblical truth which we are supposed to lean on. Just as the Accords had already caused the Avengers family to become divided, it didn’t take much for the bad guy to sprinkle a little more hate causing them to fully turn on each other in the end.

“For He Himself is our peace, who has made both one, and has broken down the middle wall of separation” Ephesians 2:14 NKJV

Focus your eyes back to God so he can mend these divided walls.

“I have a serious concern to bring up with you, my friends, using the authority of Jesus, our Master. I’ll put it as urgently as I can: You must get along with each other. You must learn to considerate of one another, cultivating a life in common.” 1 Corinthians 1:10 MSG

I felt the enemy trying to take me out with this strategy recently. We’ve had some changes happening in my church and we’ve had some new associate pastors taking over certain duties. Change is always hard for any organization. One of these pastors, in particular, just rubbed me the wrong way and I began to take it personally. I began to let it affect my ability to focus on worship and focus on serving others each Sunday. I was almost ready to take some time off from serving just because this person got under my skin. I was relieved (sort of) to hear that I wasn’t the only one he was upsetting. I say “sort of” because it was a relief to know that I wasn’t just making more out of a situation than it was. But then my relief turned into worry because I realized the enemy almost had me and many others in my church family! He planted some seeds of turmoil in our church family in hopes to drive us away from it!

Back to the movie…

Uniting Despite Our Differences

If you’ve followed the entire MCU saga (which included individual movies about the Avengers, each of the members, as well as Guardians of the Galaxy), they almost always ended with 2 former enemies coming together to take out the bigger threat. Families that were former lifetime rivals realized they were all fighting a greater enemy and put aside their individual differences to fight him.

“Two are better than one, because they have a good return for their labor.” Ecclesiastes 4:9 NIV

When we are divided, we are easier targets for the enemy to infiltrate. We are more easily sidetracked with the nonsense of politics and drama. From the MCU perspective, they couldn’t take down the bigger thread in the beginning because they were individually so preoccupied with what the other team was doing. When they finally banded together, they created a stronger force that wasn’t so easily penetrated.

“Though one may be overpowered, two can defend themselves. A cord of three strands is not quickly broken.” Ecclesiastes 4:12 NIV

Although Civil War ended with members of the Avengers fighting each other, they did come back together in the later movies. They realized they had to put aside their individual issues (which were born out of enemy interference) if they had any hope of saving the Universe and all humanity. In the movie Endgame, they ALL had a crucial part to play in taking down Thanos and restoring the Universe to its previous state (and thus saving humanity).

In the same way, we as Christians must stand together. We must put aside our bickering and taking of sides.

There is only one side!

When we have unity among Christians, we create an impenetrable wall that the enemy can’t get through. We are only as strong as our weakest link which makes it so important that we leave no soul behind. One lost soul can be the catalyst that infects our entire family. The enemy will use that one person in ways beyond what we can imagine in order to turn us on each other.

“Above all, put on love, which is the perfect bond of unity.” Colossians 3:14 CSB

When we have unity among Christians, we create an impenetrable wall that the enemy can't get through. Click To Tweet

We Are Better Together

The easiest way to take down a group is to let them destroy themselves. The devil knows this! Think about it. Why should he work so hard at killing Christianity when he can just sprinkle a little bit of turmoil in our family (children of God) and watch us destroy it ourselves! When unity among Christians is lost, the enemy has an open playground. We must come together as one family – Children of God – in order to win the battle against the enemy.

I pray that you forgive those who’ve wronged you. Love those who think differently than you do. Avoid arguments and before you respond to another person (or comment on their Facebook post) ask yourself “What would Jesus do in this situation?”

**We use verses from different Bible translations. To see more information about the copyright for each one, please visit our Scripture Citations.

Previous Post: « Serving Your Christian Blog Audience – What is Your “Help”?
Next Post: 102 Life-Changing Reasons for Going to Church Regularly »

Welcome! I'm LeeAnn and I am passionate (or obsessed lol) with helping Christian bloggers flood the Internet with more Jesus! Kingdom Bloggers was created to help Christian bloggers reach their full calling to ministry by learning how to create a solid foundation so they can reach more people for the Kingdom. You will also find content on all aspects of faith and Christian living, written by our amazing contributing writers. Read More…

177shares
177shares
We use cookies to ensure that we give you the best experience on our website. If you continue to use this site we will assume that you are happy with it.OkNoPrivacy policy