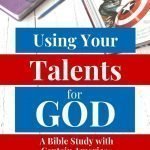 There are times when movies can teach us about real-life. As I watched Captain America: The First Avenger, I was surprised at the lessons that surfaced about using your talents for God. Don’t worry, I’m going to share every last one of them with you. Before we start, let me warn you: there will be spoilers in this post. If you haven’t watched the movie, pin this post for later and do that first. Now we have that out of the way, let’s get started.

Steve Rogers was trying to get into the army. It was the height of World War II and Uncle Sam wanted everyone–except Steve. The fact that he couldn’t pass the screening to get into the army should tell you something about him. Asthma, rheumatic fever, heart palpitations, high blood pressure…if there was a chronic illness that would prevent someone from joining the army, he had it or was related to someone who did.

But, he had a passion. He wanted to be in the army using the gifts he had for good. Fast-forward a few frames and he was enlisted through an experimental program and is now in the army. Yeah! Dream come true. Or was it?

Steve quickly learned that being in the right place doesn’t always mean you’re going to get the chance to use your gifts in the right way. But enough rambling. Let me tell you how Captain America can teach you how to use your talents for God.

Why You Should Use Your Talents for God

Everyone has a powerful inner desire to do something. This desire comes from God but can be used for good or evil. Steve Rogers didn’t want to kill anyone. He didn’t want to fight in a war and possibly lose his life in the process. But he believed in the rights of humanity. In his words, “I hate bullies. I don’t care where they’re from.” This passion to fight against injustice was an intricate part of his character and played out multiple times during the movie.

Like Steve, you have been given a passion. What has God written on your spirit? What causes you discomfort? What are you good at? What keeps you up at night? That may be the thing God has given you to do. Bonus points if it seems too big for you to accomplish on your own or if you’re getting a lot of pushback or fight. What you need to do at this point is to try to figure out how you can channel that “thing” into a ministry. As Christians, we have a responsibility to start using our gifts for God.

“You were meant for more than this, you know.”- Agent Carter

Be Careful of the Sly Whispers

After Steve was genetically enhanced, the senator’s right-hand man promised him that he could help his country by going on a tour across the country to improve morale. What he was really doing was making someone rich. He didn’t get to fulfill his purpose or live his dream which was to fight in the war. Instead, he got to play-act until he lost sight of his purpose. In Steve’s words, he got everything he wanted but it didn’t look like he expected it to.

When you decide to start using your talents for God, there are going to be people who try to distract you from your purpose. Some of them will be obvious in their intent but they’re not the ones you need to be worried about. It’s the ones who come to you with the serpent-like whispers that you need to worry about. They try to get you to question your purpose and the Creator who gave you the task to do. They will never come right out and tell you they think you should stop what you’re doing. Instead, they’ll pretend to be on your side and that they’re trying to help you use your talents as God intended. Learn to identify the sly whisperers and stay far away from them.

Using Your Talents for God Won’t Be Easy

Okay, so you’ve decided to be a good steward and do what God created you to do, life should be easy, right? Wrong. Just because you’re using your gifts, won’t mean things will be easy. When Steve finally broke through the glass ceiling, things got hard fast. He was doing what he was created to do, but to do it, he had to go behind enemy lines. In order for him to put his talents and gifts to their proper use, he repeatedly found himself in the fiercest battles. Eventually, using his super-soldier status meant he had to face the biggest bully of all: Schmidt.

For most of the movie, Johann Schmidt looked like a normal, albeit fanatical, person. It wasn’t until about halfway through the movie that he tore off his face. Literally. I did tell you this post had spoilers, right? When he ripped off his mask, his face was this red, demonic-looking thing. As I watched, I thought, “Hello! Satan has decided to reveal his true colors.” But here’s the thing: most of the time that does not happen in real life. We like to fool ourselves into believing Satan is a monster with thick, red skin, horns and a pitchfork.

2 Corinthians 11:14 tells us Satan disguises himself as an angel of light. He was created by God and was considered “the signet of perfection, full of wisdom and perfect in beauty” (Ezekiel 28:12 ESV). The enemy wears a mask and looks like a normal person. Don’t be fooled. The enemy we’re fighting is spiritual, not physical. The sooner we accept that the easier it will be for us to recognize him when he comes at us.

The Enemy Destroys Everything

The enemy is not content to destroy one small thing or even one person. He won’t be satisfied until he has destroyed everything. Schmidt started Hydra as the scientific arm to the Nazis. His sector was financed by the Führer and expected to use technology to create weapons for use in the war. One year later, he had yet to produce anything to show for it. Oh, he had created the weapons, but he was using them to further his personal agenda. When the Führer sent his men to get a report of what he was doing, he used his newfangled weapon to kill them. Now he had the freedom, in his mind, to finalize his plan to destroy all the major cities in the world.

Satan will not be content to remain confined in a tiny area of our lives. If we give him permission or access to come in, he will not stop until he has destroyed everything.

“He resented my genius. He gave you everything. What made you so special?”- Schmidt to Captain America

The Creator Is Always There

One of the things I love about the Avengers franchise is the Stan Lee cameos. I look forward to seeing him show up in each movie. God promised that He would never leave us nor forsake us (Hebrews 13:5) and this is a promise we can take to the bank. God is always there–even when we can’t see Him. We have to learn to recognize God in the situations of our life.

When you start to use your gifts for God, you may wonder if anyone notices your efforts. But regardless of how you feel remember your Creator is always there. And He knows you are using your gifts as He intended. God notices and He is pleased with you.

When You Use Your Talents for God, You May Have to Go It Alone

After Steve rescued the soldiers of the 107th battalion, all the men crowded around him cheering, some of them touching him as if they wanted to be close to a real-life hero. These were the same men who had jeered him and thrown fruit at him a few days earlier. They had booed him offstage in favor of dancing girls.

When you decide to use your talents for God, don’t expect the people around you to validate your decision. Most of them won’t. Oh, they’ll be with you when you start seeing results or if you make a lot of money doing it. But in the beginning, when you’re just starting out, they’ll be the ones telling you that your abilities and skills may be best used in another (more profitable arena).

Don’t look for validation from people because you probably won’t get it. Instead, forge ahead knowing you have the approval of your Heavenly Father.

As Christians, we are called to use our gifts and talents for God. I encourage you to figure out what you’re good at and start giving God glory through your talents.

Aminata Coote is a Christian author and blogger at Hebrews 12 Endurance. She is passionate about teaching others how to study the Bible. She encourages women to spend time with God and root their identities in Christ so they’ll be able to focus on running the race God has set before them. She is also the author of multiple books including How to Find Your Gratitude Attitude and Through God’s Eyes: Marriage Lessons for Women. You can connect with her on Twitter, Facebook, Instagram, Pinterest, and Youtube.

Welcome! I'm LeeAnn and I am passionate (or obsessed lol) with helping Christian bloggers flood the Internet with more Jesus! Kingdom Bloggers was created to help Christian bloggers reach their full calling to ministry by learning how to create a solid foundation so they can reach more people for the Kingdom. You will also find content on all aspects of faith and Christian living, written by our amazing contributing writers. Read More…

116shares
116shares
We use cookies to ensure that we give you the best experience on our website. If you continue to use this site we will assume that you are happy with it.OkNoPrivacy policy