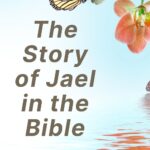 Who was Jael in the Bible?

Have you ever wondered about that woman in the Bible who drove a tent peg through a man’s head?

That would be her! But why on earth would she do something like that? I mean, wow! Tuck the man in, let him fall asleep, and then end his life? Sounds very much counter-cultural, cruel, and intimidating.

As crazy as the story is, there is so much we can learn from the story of Jael in the Bible. Jael, (and Deborah), are two women who changed Israel’s future for the better.

So let’s spend some time investigating, and getting to know some of the awesome things we can learn from Jael and her story.

The Story of Jael in the Bible

Judges 4-5 tell the story of Jael, Deborah, Barak, Sisera, and Jabin. The story of God coming to the rescue, using some unlikely resources: A storm, a woman, and a tent peg.

150 years or so after Joshua died, is where you’ll find the story of Jael in the Bible. By this time, there have been several cycles of ‘apostasy’ where the Israelites ‘forget’ that God is the one who’s been giving them all the good things, and start worshiping false gods. This leads to God allowing the Israelites to be oppressed, which means they cry out to God, who rescues them. Wash, Rinse, Repeat.

Jael is recorded as being the wife of Heber the Kenite. The Kenites are the descendants of Moses’s father-in-law’s family, and according to Joshua 1:16 the Kenites settled in the Negev, in Judah.

So, You would expect them to be on the side of the Israelites, right? Well, it would seem most were. But Heber the Kenite had moved away from his kin, and made an alliance with Jabin and Sisera of Canaan (Judges 4:11, 17).

These guys are not nice. Israel is suffering under their efforts. Jabin and Sisera have no mercy. But God calls for the men of Israel to make a stand. Deborah the Judge spreads the word, but they won’t go without her. She says she’ll go, but that a woman will have the victory.

God sends a storm that mires the enemy chariots and gives Israel the advantage.

Next thing you know, Sisera is on the run and thinks he’ll be safe in Jael’s tent. But she has an entirely different plan. She lulls him to sleep, then hammers a tent peg through his head. And receives praise for doing so.

I think this startling turn of events leads us to some very important lessons.

Why is the Story of Jael Important

The first thing I think when I read the story of Jael, is WOW!! What just happened here? But the more time I spend with her, the more I get it.

Why is the story of Jael important to us today? Because she’s a prime example of true Biblical womanhood. And I don’t intend to get bogged down in all the different theories on Proverbs 31 here!

In stark contrast to Sapphira of Acts 5, she didn’t just follow her husband in his sin. She didn’t go along with him. She may not have had a ton of choices, either in who she married, or how they lived. Whether she was a Kenite or an Israelite who intermarried, and why, we aren’t told. But she had a sense of honor, justice, and fear of the Lord.

Much like Abigail, (1 Samuel 25) Jael chose to act in direct contrast to her husband’s obvious preference. This may really blow popular teaching out of the water, but submission (headship) does not mean going along with whatever your husband wants. We do not give up all rights or responsibilities to do the right thing, just because we’ve married.

Jael shows us a true example of being a God-fearing woman. She knew what Sisera was capable of, and that he was running away. Rather than give him the chance to escape and do more evil against God’s people, she acted. With the tools available to her in her daily life, she did what had to be done.

Instead of waiting for someone ‘more qualified’ or any other justifier, she stepped up and got the job done. Maybe she would have preferred to run away, as Hagar did, but she didn’t.

I don’t know about you, but sometimes (more often than seems appropriate) I feel completely inadequate to the task. Unqualified, not smart enough, made too many mistakes, whatever else. Please let someone else handle this!!! I usually keep going anyways and deal with what needs to be done, but inside I’m a wreck.

I’d probably have been more like Moses, coming up with all the reasons I shouldn’t be chosen for this job. But Jael, well, she handled the situation. And while it’s recorded so calmly, I highly doubt that she was completely calm about the whole thing.

So again, why is the story of Jael important? Because she was a woman who saw an opportunity to do a really good thing, to protect and help the people of Israel (and beyond, I’m sure), and instead of waiting for someone else, she stepped up and acted.

She had compassion for God’s people and a distaste for evil. Like Rahab, she put her trust in God, against what was expected by those around her, and, in helping them, took a risk.

Now that’s an example worth following. I’ve seen some t-shirts and mugs floating around lately along the lines of ‘be a Biblical woman like Jael, and I have to say I really like them. It would be a cool way to keep reminding yourself that a Biblical woman isn’t a peace ‘keeper’ but a peaceMAKER, and does not just go along with what those around her are doing.

One of my favorite stories about the Prophet Deborah features Jael in a fantastic way. It’s not an easy read, as some bad things almost happen to Deborah, but it gives a plausible reason why Jael may have acted as she did in killing Sisera without hesitation.

Fun Facts About the Meaning Of the Name Jael

I did some research and came up with some fun facts about Jael. Jael’s name means wild mountain goat.

So I looked up mountain goats, and they’re known for being aggressive and will defend their territory. Jael sure defended her territory!

What Can We Learn from Jael in the Bible

So, what can we learn from Jael in the Bible?

I think one of the biggest lessons is that we’re to be aware of what’s going on around us. Jael couldn’t have made the decision to act in the way she did if she didn’t know that Sisera was bad news. She also had to be aware that it was an extremely opportune moment to act. Sisera was vulnerable, and I don’t think Heber was around, at the moment.

Following along with someone in authority, when they’ve sided with the enemy of God’s people, is not cool. We don’t have to go along with that and can (and should) act in ‘non-compliance’ when the opportunity arises.

We only get a brief glimpse of Jael, and it’s hard to say just what she was like, but we can see that she took courage here, and has been remembered for centuries now, for that one decision she made. To act hospitable, and then strike down the enemy.

I’m sure there are many lessons we can learn from Jael in the Bible, but what’s more important is what we do with the knowledge we gain. So, what are you going to do now that you’ve spent a bit more time with Jael?

Be sure to read more about the amazing women of the Bible: