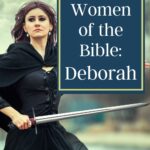 How well do we know this timeless Bible story of woman judge and prophet? Deborah stands out in so many ways from stories of other women in the Bible with the unique role God has placed her in. She is a woman of authority and strength, and steps into roles that no other woman in the Bible holds.

Who is Deborah in the Bible

Deborah is one of the few women mentioned in scripture, and as with each one, her story is distinctive. She was a woman of God, who people sought out because of her great wisdom.

The Bible tells us that she would hold court under the Palm of Deborah between Ramah and Bethel in the hill country of Ephraim. She was also a prophet of the Lord leading her people, and the wife of Lappidoth.

The Bible sadly doesn’t give us a glimpse into her back story. Instead, we arrive at the scene in Judges 4 when she has already become a leader and well known among her people.

She, much like Esther, arrives in a leadership role in a time where Israel is in great peril, to lead and intercede on behalf of her people.

Meaning of Deborah in the Bible

Deborah is an ancient Hebrew name דְבוֹרָה (Devorah). It’s a feminine name derived from דבורה D’vorah, which means “bee”. Scripture tells us that Deborah was well known, people would seek her out for her wisdom. Her name would bring comfort to the people of Israel when morale was low.

Deborah was such an amazing character to study in the Bible. She held some amazing roles and led her people when they desperately needed someone to point them back to God. Her story is filled with strength, courage, and faith that can greatly impact us even today.

But what exactly did she do? Here are some interesting facts about the life of Deborah:

Deborah as a Leader

Deborah may have been born in a time when it was uncommon for a woman to fill the roles she did, but that doesn’t change the fact that this woman has a formidable reputation.

The Bible again doesn’t tell us much about who Barak is or how Deborah knows him, but I love how the Bible is so clear that she sent for him- she doesn’t ask, she doesn’t beg.

Deborah is a woman who knows where her authority comes from. Barak doesn’t ask questions, he just comes.

She sent for Barak son of Abinoam from Kedesh in Naphtali and said to him, “The Lord, the God of Israel, commands you: ‘Go, take with you ten thousand men of Naphtali and Zebulun and lead them up to Mount Tabor. I will lead Sisera, the commander of Jabin’s army, with his chariots and his troops to the Kishon River and give him into your hands.’” Barak said to her, “If you go with me, I will go; but if you don’t go with me, I won’t go.” “Certainly I will go with you,” said Deborah. “But because of the course you are taking, the honor will not be yours, for the Lord will deliver Sisera into the hands of a woman.” Judges 4:6-9 NIV

When Barak arrives Deborah immediately brings him into the plan that God has given her. I think it’s pretty amazing that this man doesn’t have one question, he doesn’t need any convincing. He’s been told to gather an army and go and fight the army that has been oppressing the Israelites for 20 years, we can only imagine what he must have been thinking.

At first glance his response sounds like he’s afraid, but I can’t help but think that perhaps He wanted Deborah in the Bible to come with him because he knew it wasn’t going to be easy. He knew that there would be days ahead that he was going to need someone in his corner to remind him of what the Lord had declared.

Characteristics of Deborah in the Bible

The story of Deborah in the Bible is one filled with wonderful elements that can inspire and equip us today. Let’s take a look at some of the many characteristics of Deborah. Characteristics that we should all strive to emulate in our own lives.

Deborah Was a Woman of Courage

One of the biggest characteristics that come to mind when you think of Deborah in the Bible is courage. She followed after God with all of her heart and led her people courageously. Leading isn’t an easy task and yet Deborah’s courage shines through history.

Deborah served her people with wisdom as a prophet, as a judge, and as a military leader. Through her courage as a leader, her wisdom impacted generations to come and even us today.

Deborah served her nation with courage and wisdom but also with strength. She was a fearless leader that boldly led her people on the path God had set, without question. Without fear of what others would say or think, she was confident in her God and who she was in Him.

Deborah Nurtured and Supported the People She Led

Like a mother, she spoke truth into the lives of her people and encouraged them. When Barak arrived and she tells him of the Lord’s plan, she encourages him and acknowledges his role as the leader of the army. Deborah’s confidence in God’s power rubs off on everyone around her and gave the Israelite’s assurance God was with them.

Deborah Had a Heart for Justice

As the only woman judge mentioned in the Bible, and the only judge also called a prophet she had some big roles to fill. And yet Deborah serves her nation with great knowledge as she guides them back to God.

Deborah was a Good Shepherd to Her People

God raised Deborah up to a leadership position to shepherd His people after they had turned away from Him. She led the people of Israel back to their God and eventually to victory against those that were oppressing them.

Deborah was wise and not afraid to speak the truth boldly. She was sure of who God was and because of that she was direct and spoke the truth. Because of this she was revered judge that was sought out to settle disputes.

Deborah’s confidence was firmly planted in her God, she knew who He was and what He could do and because of that she walked in confidence. God had placed her in this role for His purpose, she wasn’t here because of her own skills or talent.

Deborah was trusted because of her courage and heart for justice she was trusted amongst her people. She was known to be just and wise and make fair rulings. Because of this she had gained the hearts of her people making them willing to follow her into battle.

Deborah Was a Humble Woman After God’s Own Heart

Deborah didn’t lead with arrogance, it was not her plan that she presented Barak with instead she was a woman who sought after God and trusted in His plan. She was humble enough not to let her position go to her head.

Deborah Was a Warrior

She shepherded her people, with wisdom and courage, and then she became a warrior to defend them. Like a good shepherd, she rose to defend her flock from the wolves that had been oppressing them.

Deborah is more than just a woman of words, she was a woman of action. Leading from the front as an example and full leaning on her God to see her through. Her faith should be an example to all of us.

What We Can Learn From Deborah

Deborah is a special hero in the Bible that will forever be someone to look up to, a woman of strength, authority and bravery that reminds us to stay firmly planted where He has placed us no matter what.

The story of Deborah in the Bible is a wonderful example of what a woman who has stepped fully into God’s calling on her life can accomplish. She stands like a beacon through history to teach us about strength, courage and wisdom and what a leader should look like.

Deborah is a reminder that no matter how troubled the world around us is, our God is in control and has called us into this position for a reason. Whether our role is in our families or our communities, God has a purpose for us.

If you’d like to dive deeper into her story, be sure to check out this Deborah Bible Study!