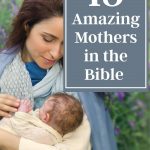 Isn’t it wonderful that God has provided us with hundreds of stories of His people through scripture to teach, guide, and instruct us?  As a mom, I am forever searching God’s word seeking wisdom, and trying not to screw things up.  Let’s take a look at moms in the Bible and glean knowledge from their lives and experiences.

What Does the Bible Say About Mothers

What does scripture tell us about mothers?  There are many verses that instruct us to obey our mothers and fathers, there are verses instructing mothers to love their children, but rather than going through a list of verses, let’s focus on one special mother.

Most scholars agree that the virtuous woman from Proverbs 31 is written about Bathsheba, Solomon’s mother.  What a beautiful tribute to her!  He must have thought very highly of her as he penned such beautiful praise.

A wife of noble character who can find? She is worth far more than rubies. Her husband has full confidence in her and lacks nothing of value. She brings him good, not harm, all the days of her life. She selects wool and flax and works with eager hands. She is like the merchant ships, bringing her food from afar. She gets up while it is still night; she provides food for her family and portions for her female servants. She considers a field and buys it; out of her earnings she plants a vineyard. She sets about her work vigorously; her arms are strong for her tasks. She sees that her trading is profitable, and her lamp does not go out at night. In her hand she holds the distaff and grasps the spindle with her fingers. She opens her arms to the poor and extends her hands to the needy. When it snows, she has no fear for her household; for all of them are clothed in scarlet. She makes coverings for her bed; she is clothed in fine linen and purple. Her husband is respected at the city gate, where he takes his seat among the elders of the land. She makes linen garments and sells them, and supplies the merchants with sashes. She is clothed with strength and dignity; she can laugh at the days to come. She speaks with wisdom, and faithful instruction is on her tongue. She watches over the affairs of her household and does not eat the bread of idleness. Her children arise and call her blessed; her husband also, and he praises her: “Many women do noble things, but you surpass them all.”

Moms in the Bible

When we think of moms in the Bible, our minds immediately turn to the more well known ones and the struggles they faced:

These mothers teach us about the goodness of God, encourage us to persevere when life is hard, and allow us to see God in action as he deals faithfully with those who love Him.

Single Mothers in the Bible

Just like today, the Bible is full of brave women mothering on their own.  Being a single mother is not easy and these women experienced the same emotions, trials, and fears that we do today.  Let’s explore some of the single mothers the Bible tells us about.

The story of Tamar is found in Genesis chapter 38, sandwiched in the middle of the story of Joseph.  Given the odd nature of the story, one might be willing to skip it entirely in an effort to read about Joseph and the amazing story of God’s providence, except for this verse in Matthew (1:3) – “Judah the father of Perez and Zerah, whose mother was Tamar.”

The Widow of Zarephath is found in 1 Kings 17.  When we meet her, she has suffered years of drought and is gathering sticks to make a fire, cook the last of her food for her and her son, and prepares to die of starvation.  Not a great season of life for her.  She musters her faith when the prophet Elijah asks her to make him something to eat and is rewarded with a never ending supply of meal and oil.

However, as life often brings us sadness along with joy, we find that her son soon dies.  In her pain she strikes out at Elijah who then raises him from the dead.  If you feel as if your faith has been on a roller coaster, the widow of Zarephath can relate.

This widow is another story of faith and how God provides.  Found in 2 Kings 4, Elisha performs a miracle to provide this widow and her sons with money to live off of after her husband dies.

Unknown Mothers of the Bible

George Eliot once remarked that “The happiest women, like the happiest nations, have no history.”

As moms, we often struggle through the mundane, feeling unimportant and restless, but I assure you that God sees you.  The Bible mentions strong mothers of faith who are never named.  The best example of this is the Canaanite mother.

Leaving that place, Jesus withdrew to the region of Tyre and Sidon.  A Canaanite woman from that vicinity came to him, crying out, “Lord, Son of David, have mercy on me! My daughter is demon-possessed and suffering terribly.”

Jesus did not answer a word. So his disciples came to him and urged him, “Send her away, for she keeps crying out after us.”

He answered, “I was sent only to the lost sheep of Israel.”

The woman came and knelt before him. “Lord, help me!” she said.

He replied, “It is not right to take the children’s bread and toss it to the dogs.”

“Yes it is, Lord,” she said. “Even the dogs eat the crumbs that fall from their master’s table.”

Then Jesus said to her, “Woman, you have great faith! Your request is granted.” And her daughter was healed at that moment.  (Matthew 15: 21-28)

Did you catch her determination?  Her incredible faith?  Her overwhelming desire to help her child no matter who was against her?

Bad Mothers in the Bible

Up until this point, we have been talking about mothers of faith, but let’s turn our attention for a minute to bad mothers of the Bible.  We could learn a lot from them as well.

Have you ever heard the expression “remember Lot’s wife”?  We are remembering her because of the deadly mistake she made which turned her into a pillar of salt.  Lot’s wife was carefully escorted out of the city of Sodom just as God was destroying it, but her heart was not faithful to God and she has become our constant reminder that our carnal attachments only result in death.

The story of Athalia is found in 2 Kings 11 and reminds us that the quest for power never ends well.

Ahazia, Athalia’s son is king of Israel.  He is killed by Jehu, who was busy eliminating wicked King Ahab’s bloodline from the royal throne.

When Athalia finds that her son is dead, she kills the rest of the royal family and rules Israel for 6 years.  However, unknown to her, baby Joash had been hidden during Athelia’s murderous campaign and is crowned king at 7 years old.

Of course, Athalia protests, but is killed by the sword.

All the people of the land rejoiced, and the city was calm, because Athaliah had been slain with the sword at the palace.  (2 Kings 11:20)

Yes, Athelia is definitely one of our examples of a bad mother in the Bible!

A more well known wicked mother is Herodias who encourages her daughter to dance before Herod, knowing his lust for pretty young girls.  She was not unwise, and used this to her advantage as she wanted John the Baptist silenced.

Let’s back up a second and take a look at who Herodias actually is and why it was so important to her to kill this great prophet of God.

Herodias is the granddaughter of Herod the Great and marries Philip 1 who is actually her uncle.  She has a daughter, Salome.  Herod Antipus, Philip’s brother, visits Philip and Herodias in Rome.  While there he decides he no longer wants his Arabian wife and takes Herodias instead.  This is a good move for Herodias because she is now queen of Galilee.

However, John the Baptist loudly accuses Herod of stealing his brother’s wife and while Herod found John to be somewhat fascinating, Herodias saw him as a threat to her position.

She determines to have him killed and does so.

And you think your life is crazy, right?  Thankfully, there are no murderous queens in mine!  However, I can relate to those moms stressing over finances, unable to pay the bills.  I have wept before the Lord with a broken heart and I have found healing in the presence of Jesus.

May we reach across the centuries and touch the faces of the women who lived before us, those who endured the pain of infertility, the bitter consequences of sin, and the fear of wicked rulers.  Let us join hands with these women in faith, believing that we are stronger together, and may we follow in their footsteps as they submitted their lives and children to the Almighty.