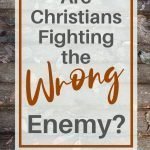 A Bible study from The Walking Dead? Isn’t that a zombie show? Well, yes it is. But a lot can be learned about our lives as Christians from the battles fought and won on this show. It is a fight between good and evil but not always in the way you would think. Are Christians fighting the wrong enemy? Find out if you are doing battle with the right one! 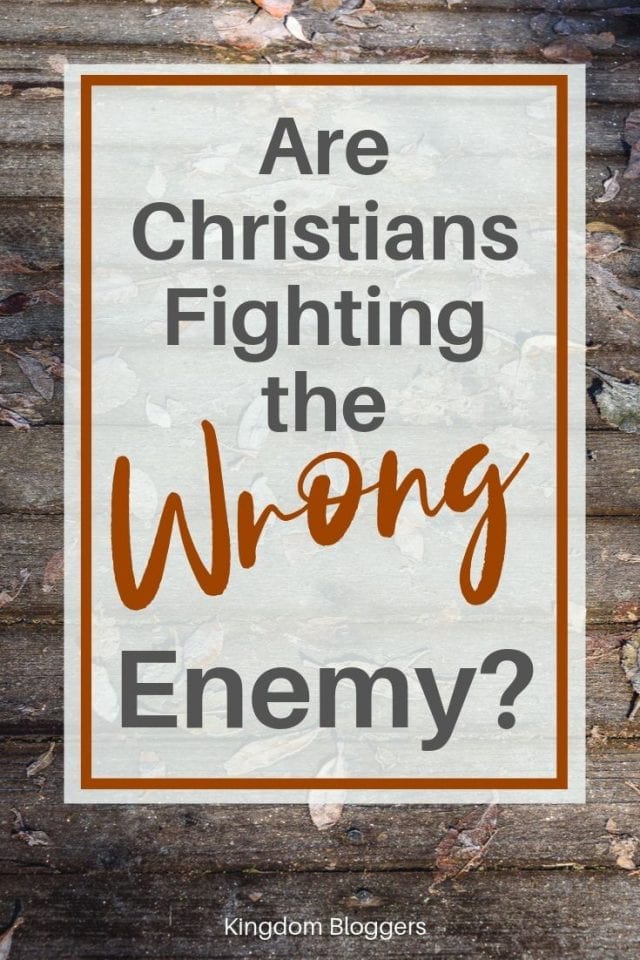 Ok so like my former pastor, Tyler Edwards, I love zombie movies and tv shows. He actually wrote a book called Zombie Church, which I highly recommend. But yes, zombie movies are sort of a thing I used to really love although I don’t really watch them anymore since I’ve been saved. However I do admit, I like The Walking Dead!

But I don’t like these movies and shows for the reasons you may think.

I love this show, not because of the gore or anything like that, but because the parallels I seem to draw from them.

There is truly a story there of good against evil, in many more ways than what you would think!

When you first begin the series, it has a LOT of gore, I admit. I am talking a LOT of gore. I am not a fan of that kind of stuff but it IS a story that begins with this zombie onslaught so they do have to depict the reality these characters are facing in the world.

However, that is not what the story is about at the core. Contrary to what many people think, the story of these characters and what their lives become is the TRUE plot…not just zombies and gore.

About the Walking Dead

I will not give away any spoilers here for anyone who wishes to watch, but Rick Grimes is a sheriff who is shot in the line of duty and wakes up in the hospital to find the world has entirely changed.

Everyone and everything he knew was gone (or at least seemed to be) and all of a sudden the world is populated by these zombies who know nothing but filling their appetites. They are looking for one thing and one thing only; flesh.

It is kind of like us before we knew Jesus isn’t it? We were sort of walking around aimlessly just focused on flesh.

Like these zombies, we followed our base instincts and desires and were inward-focused.

Rick eventually meets up with some of his family and a new group of friends and they go on to try to find ways to fight these zombies or “walkers”. They find out what their weaknesses are, how to trick them. They even figured out how to use them as weapons.

They learn more and more about this common enemy and work together to fight this threat to what is left of humanity.

As they learn how to eliminate these zombies they also learn how to prevent people who die from turning into these walkers, reducing their numbers. Learning how to stop the propagation of the threat is key to reducing the attacks!

They even go on to eventually form small communities and grow food. After all, raiding abandoned homes and stores for supplies can only last for so long before they’re empty.

They continue to battle this common enemy together, even forming friendships and alliances with other survivors they come across along the way. The group grows quite large and they become family to each other.

Then the gore really begins to slow down. You don’t see as much of these walkers attacking people as in the beginning because humans had eventually become so adept at battling this enemy.

But then something shifts…

These pockets of survivors soon turn from fighting these walkers to fighting each other. Rick and his community meet up with other humans who are exploiting the situation and are hungry for power. Some characters come up that are so cruel they make living with walkers look like the better option!

Greed and power kick in and these groups arise who want to get something from Rick and our group of heroes.

The enemy was once these walkers who were the true threat to society! But once people learned about their enemy, they got overconfident. They lifted themselves up and wanted to be in control.

One group after another rose up to do battle with our friends, Rick and company! It was good against evil. It was those who wanted to live in peace and help others build a new world where people come together as a community against those who wanted to harm others and help only themselves.

People lost their sense of decency and humanity and gave in to base wants and needs. The irony is they ended up being no better than the zombies! They focused on fleshly wants!

Our friends wanted to rebuild for all people and others just wanted to have power for themselves.

The walkers were no longer the only ones seeking the flesh.

Do we do that as Christians? Do we begin fighting the wrong enemy?

Are Christians Fighting the Wrong Enemy?

Do we allow the enemy to make us think our fight is with people rather than him?

The Bible tells us:

Do we get offended and feel we are being attacked by people rather than the enemy?

Maybe we forget we are not in competition with others but we all have our own calling and gifts from God. Are we playing the comparison game, thinking we have to be in measure ourselves up against what they have or what they are achieving?

Do we think we have to have bigger and better?

Maybe we become like the people at the Tower of Babel.

Now the whole world had one language and a common speech. As people moved eastward, they found a plain in Shinar and settled there.

They said to each other, “Come, let’s make bricks and bake them thoroughly.” They used brick instead of stone, and tar for mortar. Then they said, “Come, let us build ourselves a city, with a tower that reaches to the heavens, so that we may make a name for ourselves; otherwise we will be scattered over the face of the whole earth.”

But the Lord came down to see the city and the tower the people were building. The Lord said, “If as one people speaking the same language they have begun to do this, then nothing they plan to do will be impossible for them. Come, let us go down and confuse their language so they will not understand each other.”

God didn’t scatter them and confuse their language because they all worked together to achieve this tower.

He did it because of their motives. They said their desire was “to make a name for ourselves”. They wanted to reach Heaven by their own efforts.

Like the serpent in the garden tempted Eve with the fruit claiming she could be like God, the people built this tower with the goal that it “reaches the heavens” to make a name, not for God but for them. They wanted power. They wanted to be like God on high.

Related: Unity Among Christians: A Bible Study with Captain America

When we turn our focus onto our own wants and needs, we are being led by the flesh and when we allow our flesh to lead, we are no better than zombies walking around instinctually following after it.

In the process, we end up fighting people rather than the TRUE enemy, the father of lies!

He wants us to take our focus off God and put it on him! We could start off with the right motives but then the enemy comes in and creates in us a desire to grow bigger, gain more.

Keep your eyes on your true enemy the devil. And like our friends on the show no longer have these walkers as their biggest threat, WE too wrestle not against flesh and blood!

**We use verses from different Bible translations. To see more information about the copyright for each one, please visit our Scripture Citations.

Diane Ferreira of Worth Beyond Rubies is a wife and mom, a Jewish believer in Yeshua (Jesus) and yes, a blogger. She lives in BEAUTIFUL Northwestern Connecticut and when she not blogging, you will find her spending time with her husband and kiddos…or up in her craft room designing custom tumblers, making reading pillows or quilting! She is also an avid amateur genealogist and loves researching her family history! You can follow her on Facebook, Twitter, Instagram, and Pinterest!

1 thought on “Are Christians Fighting the Wrong Enemy?”