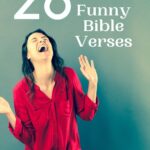 Did you know that the Word of God includes some funny Bible verses?

We know that many verses, when taken out of context, might sound harsh or sarcastic, which is why reading the entirety of the Bible is important to fully understand it.

But, seriously, some of these sarcastic Bible verses will almost make you choke on your morning coffee!

Before I go any further, I want to make sure that you understand that I take the Bible as a serious matter! But in all things, we must be able to find humor and laugh a little!

Even the Bible – the literal Word of God – can offer some opportunities to find humor depending on the translation you are using. We know that some translations are a bit harder to understand. But some, just translate the message in a way that leaves you thinking “What did that just say?” lol!!

These funny Bible verses, when taken out of context, will surely have you rolling and need a box of tissue to dry your eyes!

Song of Songs 7:4 NIV: Your nose is like the tower of Lebanon looking toward Damascus.

Ok, we should absolutely NOT refer to someone in this way but you gotta admit, that is funny considering it is in the Bible!

And then there is this one where it speaks of a maniacal driver:

2 Kings 9:20 NIV: The lookout reported, “He has reached them, but he isn’t coming back either. The driving is like that of Jehu son of Nimshi—he drives like a maniac.”

And what about this funny Bible verse that seems to indicate that Paul was so boring that his readings put a man to sleep!

Acts 20:9-10 Seated in a window was a young man named Eutychus, who was sinking into a deep sleep as Paul talked on and on. When he was sound asleep, he fell to the ground from the third story and was picked up dead. Paul went down, threw himself on the young man and put his arms around him. “Don’t be alarmed,” he said. “He’s alive!”

Now, I would never wish physical harm to anyone but you must admit – this next one is funny!

Galatians 5:12 HCSB: I wish those who are disturbing you might also get themselves castrated!

And this one about 2 brothers' names…

Genesis 22:21 NIV: Uz the firstborn, Buz his brother, Kemuel (the father of Aram),

And what about that time God told Joshua he was old?

Or that time that Jesus got mad at an olive tree…

Matthew 21:18 NIV: Early in the morning, as Jesus was on his way back to the city, he was hungry. Seeing a fig tree by the road, he went up to it but found nothing on it except leaves. Then he said to it, “May you never bear fruit again!” Immediately the tree withered.

Second only to being grounded in God's Word, the key to a long and happy marriage is the ability to laugh together – and at each other! Now, I don't mean “laugh at each other” in a hateful way such as to disparage the other person or belittle them.

But let's be honest, sometimes husbands and wives can totally get on each others' nerves! And these funny Bible verses about love and marriage are spot on!

Proverbs 11:22 NIV: Like a gold ring in a pig’s snout is a beautiful woman who shows no discretion.

Proverbs 27:15 NIV: A quarrelsome wife is like the dripping of a leaky roof in a rainstorm

Proverbs 21:9 NIV: Better to live on a corner of the roof than share a house with a quarrelsome wife.

Proverbs 21:19 NIV: Better to live in a desert than with a quarrelsome and nagging wife.

Ok, first and foremost, I know that alcoholism is no laughing matter! But the Bible does have some pretty funny Bible verses about drinking that, when taken out of the intended context, will have you laughing!

Whether it be character traits of someone you know who acts crazy when they drink or the silly games intoxicated people play. I'm sure these hilarious verses will remind you of someone!

Acts 2:15 CSB: For these people are not drunk, as you suppose, since it’s only nine in the morning.

Judges 7:5 CSB: Separate everyone who laps water with his tongue like a dog. Do the same with everyone who kneels to drink.”

Mark 14:52 NIV: he fled naked, leaving his garment behind.

Mark 9:34 NIV: But they kept quiet because on the way they had argued about who was the greatest.

Proverbs 31:6 HCSB: Give beer to one who is dying and wine to one whose life is bitter.

I don't know what it is about the topic of poop that makes people laugh! For me, I can't help but laugh every time I see a dog doing his/her business while out for a walk with its owner.

And moms with babies – oh the poop stories they can tell! Most of them aren't so funny when they happen, but they can totally laugh about these stories later when telling others about them!

And believe it or not, there are some funny Bible verses about poop!

Ezekiel 4:12 NIV: You will eat it as you would a barley cake and bake it over dried human excrement in their sight.

Ezekiel 4:15 NIV: He replied to me, “Look, I will let you use cow dung instead of human excrement, and you can make your bread over that.”

Isaiah 36:12 NIV: But the commander replied, “Was it only to your master and you that my master sent me to say these things, and not to the people sitting on the wall—who, like you, will have to eat their own excrement and drink their own urine?”

As if that wasn't enough, here are even more funny Bible verses to make your stomach hurt from laughter!

To paraphrase: “Go find me someone who talks to dead people so I can ask for her advice.” Now, I don't know about you, but most people tend to steer clear of these people lol!

Here is another one that had me doing a double-take! This one varies among translations and most of them aren't as crazy as this one:

1 Samuel 6:4 JUB: Then said they, What shall be the expiation of guilt which we shall pay unto him? They answered, Five golden hemorrhoids and five golden rats, according to the number of the cardinals of the Philistines, for the same plague that is on you is also on your cardinals.

And I would NEVER condone violence against a child, but I'm sure some parents have at least had a momentary thought such as this one:

Psalm 137:9 HCSB: Happy is he who takes your little ones and dashes them against the rocks.

And here are a few more hilarious Bible verses that make you go “huh?”!

Exodus 32:24 NIV: So I told them, ‘Whoever has any gold jewelry, take it off.’ Then they gave me the gold, and I threw it into the fire, and out came this calf!”

Song of Solomon 4:2 ESV: Your teeth are like a flock of sheep just shorn, coming up from the washing.

Who knew the Bible could be so funny? I mean – for REALS – some of these verses of Scripture can make you choke on your drink or wet your pants from laughing so hard!

Hopefully, these funny Bible verses inspire you to dive into the Word of God more often and learn what these things mean in full context. But for today, I truly hope you were able to get rid of some of that negative energy you may have been carrying around and just laugh!

38 shares
Scroll to Top
We use cookies to ensure that we give you the best experience on our website. If you continue to use this site we will assume that you are happy with it.OkNoPrivacy policy