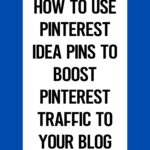 Are you struggling with making any progress with Pinterest?

Pinterest used to be a really great driver of traffic for those whose SEO hadn’t quite taken off. Unfortunately, in the last couple of years, Pinterest has had what I call an “identity crisis” in that it just keeps changing what it wants.

Right now, Pinterest Idea Pins are the hot thing that gets you “cool points” with the Pinterest algorithm.

But what exactly are idea pins and how do they help you get more traffic to your blog?

Idea Pins are basically the same as video pins, with the exception of how you upload them.

Instead of just being a single image like the one you pin from your post, idea pins are meant to give “ideas” to your readers. The length of the video should be no longer than 60 seconds.

They can either be an actual video that you’ve uploaded from your phone or one that you’ve made using Canva and other editing software.

The one thing about idea pins compared to video pins is this: idea pins are not clickable. (**They are beta testing with some accounts to enable you to add a clickable link but only a limited number of people have this option right now.)

So, then, what is the point of making them if they can’t be clicked through to your website?

Since this is Pinterest’s “thing” right now, adding them to your profile basically gives you “cool points” with the algorithm, and more of your older regular blog post pins will be shown to more people.

So, the traffic to your blog is more of a secondary effect and not a direct effect.

What Makes a Good Idea Pin

This is going to vary depending on your audience and what you are offering them.

But, as with all social media and, in general, what people search for on Pinterest, it is important to offer value and/or solve an issue.

For every blog post, you should have some “take away” points. For example, if you had a post that was titled “5 Reminders That You Are Loved by God”, you could simply make the title slide, followed by slides with each verse/reminder. Here is an example of this concept.

Many of my blog posts are “Bible Verses About” and “Verses to Pray for” type content. I create idea pins using the verses from the post. Here is an example of this concept.

As a Bible Study blogger, I share a daily verse every single day. I actually create it in Instagram as a story first thing in the morning, then share it as an idea pin. Here is an example of that concept.

I also do what I call “60-Second Theology” devotionals for TikTok and IG Reels where I break down a verse of scripture. Since I’ve already made the video and it is less than 60 seconds, I go ahead and upload it as an Idea Pin. Here is an example of this concept.

Ok, so I am not a huge fan of Pinterest because it can easily become a time-suck that yields a minimal return on your time investment.

But, I am a fan of repurposing stuff you’ve already made. I also don’t have an issue with making something just for one platform as long as it only takes a minute of my time.

Hopefully, you have already invested time into learning and implementing SEO for your site in order to start laying a solid organic foundation. If not, you definitely need to do that first.

Don’t become a slave to Pinterest because then you’ll never get that organic foundation built.

But if you can work some of these tips into your regular blogging tasks routine, then go for it!

Having traffic come from multiple places is good (don’t put ALL your eggs in one basket) but keep in mind that organic traffic should be your number one source.

0 shares
Scroll to Top
We use cookies to ensure that we give you the best experience on our website. If you continue to use this site we will assume that you are happy with it.OkNoPrivacy policy