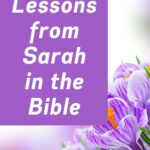 Do you know the real story of Sarah in the Bible?

Sarah, the mother of the Israelites, is such a fascinating person. She goes along with some pretty big changes Abraham makes to their lives. Moving cross country was a very big deal back then.

She was with Abraham all through his story and saw his faith waver, grow, and waver again. Walked alongside him as they grew from a small band to a great one, that was big enough to need to make treaties with kings along the way.

She gets treated badly sometimes and mistreats others. But she’s still recognized in the Hebrews Hall of Faith. So there must be a few lessons from the life of Sarah in the Bible that we can still learn and apply today.

Let’s walk along with Sarah and Abraham and their family, and see what we can discover, that would influence our lives today.

The Story of Sarah in the Bible

So who was Sarah in the Bible? She was the wife of Abraham, and also his half-sister (which wasn’t as big a deal back then). She holds a special place in the genealogy of faith, and despite her failures, God saw her, and intervened on her behalf, very specifically, and more than once!

The story of Sarah in the Bible begins in Genesis 11, sometime after the Tower of Babel and the confusion of languages. We meet her as Sarai, a barren woman over 60. We get to see glimpses of her from there through Genesis 23, where she dies, at age 127!

In the middle, her life is full of mountaintop moments where God protects her and fulfills promises to her, and we see her be foolish, selfish, and mean.

What does Sarah symbolize? Well, her name means princess, and she is the mother of the Jewish nation and considered the mother of faith.

Sarah symbolizes freedom, and God’s favor, because it was her child, rather than the son of Hagar the slave woman, who fulfilled God’s freely given promise. The one God protected.

Lessons from Sarah in the Bible

Sarah’s story is messy, just like ours. But it’s beautiful too and is filled with God’s mercy and favor, and love. Just like ours.

There are several important lessons from Sarah in the Bible that apply directly to the mess our lives are today.

God Sees You, And He is Powerful Enough to Rescue

One of the first things that happen after God speaks to Abram and they set out on this adventure of following God, is a detour to Egypt, (Genesis 12) where Abram is afraid and tells everyone that this beautiful woman is his sister, conveniently leaving off the part that they’re married. Of course, she’s immediately taken to the palace (harem, I assume).

God intervenes, and rescues her, in a clearly supernatural way. Can you imagine that? What a gift!

I wish she’d clung to that, and not doubted, but, well, I wish I would remember his faithfulness more often myself, and not keep trying to meddle with things that I think should be done differently.

God Loves Us Even When…

I don’t know what your “even when” is, but know that God still loves you. He laid down his life for you, and then took it back up, to prove that he was who he said he was, and could do what he said he could do.

For Sarah, after God rescued her from Egypt, a decade or so has passed, and she’s still not had the child God promised. So she gets antsy. So she comes up with a plan, to make things happen. (Genesis 16) Nobody bothers to consult God about this plan. Not even Abram.

A lot of heartaches (and bloodshed) could have been avoided, but no one stopped to ask God if he’d given Sarai the idea or not.

Don’t Blame God When He Doesn’t Follow YOUR Plan

Now, Sarai’s plan was to go to Abram and blame God for not giving them a child. Which obviously means she needed to fix the situation herself (insert eye roll here)

“So she said to Abram, “The Lord has kept me from having children. Go, sleep with my slave; perhaps I can build a family through her.” (Genesis 16:2 NIV)

We need to be very careful when it comes to blaming God. Because He sees the big picture, and we don’t. Because He knows what will happen if we go through this door or that one.

Things didn’t work out the way Sarai hoped. Yes, Hagar got pregnant and had a son. But jealousy and contempt and mistreatment became a way of life in camp. And those are not God’s way.

You Can’t Rush God: His Timing is Perfect

14 years after Sarai’s big plan (Comparing Genesis 16:16 with 17:1), God reconfirmed that the child he promised was specifically to be born of Sarai, who would now be called Sarah. Sarah laughed, because by now she was nearly 90, and post-menopausal (Genesis 18:11).

What blows me away here, is in light of this fresh encounter with GOD, and the events with Sodom and Gomorrah, where God spared Lot’s family and destroyed everyone and everything else in the area, Abraham immediately goes to another new location, and again passes Sarah off as his sister!

The King takes Sarah, and God again intervenes on her behalf, rescuing her. Taking her home, and positioning her for what he’d promised her:

Genesis 21:1-2 NIV Now the Lord was gracious to Sarah as he had said, and the Lord did for Sarah what he had promised. 2 Sarah became pregnant and bore a son to Abraham in his old age, at the very time God had promised him.

God did what he’d promised, at the very time God had promised. The appointed time. When it could only have been God’s handiwork. Just like he did with Mary, centuries later.

Just like he does for us. It may not be a miraculous birth, but He shows up on time, every time. It’s hard when we want it now, whatever ‘it’ is, but he is trustworthy and faithful. Ask Sarah. Sit with her for a while. See what she has to say.

Even Shaky Faith is Powerful

Sarah’s faith wavered. It shook several times. There’s no denying that. There was the time Lot “abandoned” them and took the better land (Genesis 13-14). The orphaned nephew they’d taken in (Genesis 11:27-31).

The times Abram used her to protect himself, claiming only that they were brother and sister.

The time she completely gave up on any hope of having her own son and offered her slave to Abram as the brilliant solution to all their problems.

And in between all that, she had her mountaintops, where God rescued her from Egypt, and from Abimelech. When God gave her Isaac when that should have been impossible.

But the thing to remember is she had faith in God. It wasn’t always strong, but it was real. God went so far as to make sure we never forget her faith. He placed Sarah in the Hebrews Hall of Faith:

[Heb 11:11 NIV] And by faith even Sarah, who was past childbearing age, was enabled to bear children because she considered him faithful who had made the promise.

Yes, she laughed when she heard the promise, but even so, she knew he was faithful, and could do it.

I hope some of these lessons from Sarah in the Bible resonated with you today. I hope you’ll take some time to read Genesis 11:27-23, and think about what Sarah has to say to you.

I am thankful to be able to read of others, their mistakes and successes, blunders, defiance, reconciliation, and forgiveness. It strengthens my faith, reminds me of what I’ve already learned, and helps me remember that above all, God’s got it, and I can trust him even when I don’t see how it is possible.