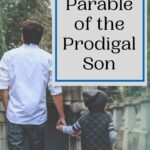 Have you ever felt like a prodigal daughter or son?

The Parable of the Prodigal Son is one of the most well-known stories in all of Christianity. It is often used to illustrate forgiveness, redemption, and reconciliation.

But what does it really mean? What does this parable represent symbolically? And how can we apply these lessons in our lives today?

We’ll explore these questions and more as we break down this wonderful story!

What is the Parable of the Prodigal Son?

In the Bible, Jesus Christ the Son of God often used parables (or stories) as teaching tools for his disciples and followers.

When we read parables, it’s important to take a step back and remember that the purpose of parables is to:

You can find the Parable of the Prodigal Son in Luke 15:11-32(ESV). However, here is my summary of the story of the father and his two sons:

A father had two sons. The younger son asked for his inheritance and left home to live a life of sin. He squandered all his money but eventually realized he needed to return home. When he returned, his father welcomed him back with open arms and celebrated his return. The older son was angry that the prodigal son received such a welcome when he stayed at home doing what was right.

What is the Main Message of the Prodigal Son?

The Parable of the Prodigal Son has the main message of repentance, redemption, and reconciliation – three important themes in Christianity today!

Let’s take a look at how we can see each of these themes in the parable.

How do we see repentance in the Parable of the Prodigal Son?

The words “repent” and “repentance” appears in the Bible more than 60 times. It can be defined as turning away from sin and returning to God for forgiveness.

We see repentance in the prodigal son when he turns away from his life of sin to return home to his father.

I will arise and go to my father, and I will say to him, “Father, I have sinned against heaven and before you. I am no longer worthy to be called your son. Treat me as one of your hired servants.”’ And he arose and came to his father. But while he was still a long way off, his father saw him and felt compassion, and ran and embraced him and kissed him. ~ Luke 15:18-20

Thankfully,  he was graciously welcomed back home by his father.

How do we see redemption in the prodigal son?

In simple terms, the word redemption means to purchase, sacrifice, or exchange something or someone from their owner for money.

In this parable, we see that the father sacrificed “the fattened calf” by killing it as a representation of buying back his son.

And the son said to him, ‘Father, I have sinned against heaven and before you. I am no longer worthy to be called your son.’ But the father said to his servants, ‘Bring quickly the best robe, and put it on him, and put a ring on his hand, and shoes on his feet. And bring the fattened calf and kill it, and let us eat and celebrate. For this my son was dead, and is alive again; he was lost, and is found.’ And they began to celebrate. ~ Luke 15:21-24

God the Father sent his Son Jesus Christ to die on the cross for our sins. That is how we have been redeemed, or bought back by God, through the death of Christ.

How do we see reconciliation in the parable of the prodigal son?

We see the prodigal son reconciled with his father when he returns home and they are both happy to be reunited.

“Now his older son was in the field, and as he came and drew near to the house, he heard music and dancing. 26 And he called one of the servants and asked what these things meant. And he said to him, ‘Your brother has come, and your father has killed the fattened calf, because he has received him back safe and sound.’ But he was angry and refused to go in. His father came out and entreated him, but he answered his father, ‘Look, these many years I have served you, and I never disobeyed your command, yet you never gave me a young goat, that I might celebrate with my friends. But when this son of yours came, who has devoured your property with prostitutes, you killed the fattened calf for him!’ And he said to him, ‘Son, you are always with me, and all that is mine is yours. It was fitting to celebrate and be glad, for this your brother was dead, and is alive; he was lost, and is found.’ ~ Luke 15:25-32

The older brother, on other hand, does not reconcile well as we can tell by how angry or resentful he feels towards his younger brother.

What Do the Characters in the Prodigal Son Represent?

There are three main characters in the Parable of the Prodigal Son:

The father represents God the Father, who desires a relationship with his creation – us! Even when we are far away from God, He looks upon us with compassion.

The younger son – also known as the prodigal son – represents people who are far off from God and choose the ways of the world over the ways of God.

The older son represents those who are obedient to living according to God’s ways and believe that they are in right-standing with God because of their obedience and good works.

What is the Moral of the Parable of the Prodigal Son?

This story is so powerful because it shows that God loves us not because He is our Father. No matter what we do, God sees us even while we are far off and is ready to embrace us.

God has never turned away from us. However, we turn away from God.

But God is so rich in mercy, that He is always ready to welcome us back with open arms.

Even when we squander our lives on the things of this world that promise to bring security, satisfaction, and significance – God has made a way for us to be reconciled back to Him.

How can we be reconciled back to God? Through the redemption of the blood of Jesus Christ. We need only to repent and trust in His Son!

It is through the righteousness of Jesus Christ that we are saved, not our own.

Let’s be careful to not make the same mistake as the older brother. If we know that it is only by grace that we are saved, and not of our own doing, we can rejoice when anyone comes back to the Father.

We all fall short of living up to God’s standards. Therefore, we should rejoice when anyone turns away from sin and runs towards God.

It’s such an amazing message for those of us who may feel lost or abandoned by others – you can come right into God’s loving embrace at any time!

Parable of the Prodigal Son Reflection

God’s Word is a mirror and we should allow our hearts and minds to be shaped by what we read and study.

Therefore, it would be beneficial to think through the following questions for personal reflection upon the parable of the prodigal son:

We must remember it’s never too late to turn back to God! He is waiting with open arms!

Hey! Hi! I’m Candice from Her Daily Bible. I am passionate about helping women to live by faith in the Son of God by renewing their minds daily in the Word of God.