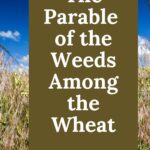 Jesus was a master storyteller and the parable of the weeds is no exception.  However, much more than just a simple story, they held important spiritual truths that are still relevant for us today (even if we might not be able to relate to the language of the day).

A parable is just that, an earthly story with a heavenly meaning.  Jesus used everyday objects that people could relate to and spun a story that contained moral or prophetic content.  Everything in the story represents something other than what Jesus is actually talking about.

Jesus was brilliant because He was able to easily attain his listeners’ attention and yet speak truths that we have pondered over for centuries.  The parable of the weeds is no exception.

What is the Parable of the Weeds and the Wheat?

Jesus is speaking to a working-class of farmers, fishermen, carpenters, and tradesmen.  They lived simple lives, observing God’s word and His laws with sincere hearts.  Their lives were filled with love for their families and a desire to work hard and create a good life for their children.

Jesus reached out to them with familiar occurrences and not only grabbed their attention, but left an impression.  Let’s read the parable of the weeds and wheat as Jesus told it.

Jesus told them another parable: “The kingdom of heaven is like a man who sowed good seed in his field. But while everyone was sleeping, his enemy came and sowed weeds among the wheat, and went away. When the wheat sprouted and formed heads, then the weeds also appeared.

“The owner’s servants came to him and said, ‘Sir, didn’t you sow good seed in your field? Where then did the weeds come from?’

“The servants asked him, ‘Do you want us to go and pull them up?’

“‘No,’ he answered, ‘because while you are pulling the weeds, you may uproot the wheat with them. Let both grow together until the harvest. At that time I will tell the harvesters: First, collect the weeds and tie them in bundles to be burned; then gather the wheat and bring it into my barn.’”  (Matthew 13:24-30)

Here we see a farmer who has seeded his field with wheat.  Unfortunately, his enemy came and added weed seeds to the field.  When the wheat sprouts, so do the weeds.

The servants notice this and want to pull up the weeds, but are advised to wait until the crop has matured.  At this time the weeds are gathered together and burned.

What is the Meaning of the Parable of the Weeds?

So, you may be wondering what the meaning of this parable is.  You are in good company!  The disciples also questioned Jesus and he answers them.

“As the weeds are pulled up and burned in the fire, so it will be at the end of the age. The Son of Man will send out his angels, and they will weed out of his kingdom everything that causes sin and all who do evil.

They will throw them into the blazing furnace, where there will be weeping and gnashing of teeth.  Then the righteous will shine like the sun in the kingdom of their Father. Whoever has ears, let them hear.  (Matthew 13:37-43)

Jesus has come to redeem mankind back to their creator.  He sows truth, teaching the way of salvation.  Just like back in the Garden of Eden, Satan is right there, hot on his heels trying to ruin everything God does.

He sows his own seeds, a wicked group.  If you’ve ever wondered how people could do the wicked deeds they do, your answer is right here.

What Satan plants is toxic, but it is difficult to identify.

This reminds me of the time, several years ago, in which I ordered a load of topsoil for my raised garden beds.  Unfortunately, this soil had a lot of weed seeds, and popping right up beside my beets were small, purple stemmed weeds that looked very similar to my beets.

I could only watch the two grow side by side until my beets were strong enough to handle being disturbed by pulling the weed growing beside it.

If you have done any gardening or are into foraging wild foods, you know that there are many look-alikes out there.  Sometimes, it is necessary to watch and observe before you know what is good and what is not.

Bearded darnel is a weed, that like my beet imposter, is very similar to wheat and they are often difficult to tell apart until they bear fruit.  Darnel had been a struggle for farmers for centuries before Jesus tells his listeners this story.

They were well aware of this poisonous imposter and were drawn to this story.

Jesus instructs his angels to let the wheat and the poisonous weeds grow together and then at the end times, begin the harvest.  The weeds, or those who are following their own ways rather than seeking God’s truth and salvation, are thrown into hell.

The wheat has been faithful and is gathered together to live with Jesus for all eternity.

What is the Moral Lesson of the Parable of the Weeds?

So, what is the moral lesson here?  It should cause one to pause and reflect and the idea of being thrown into the fire isn’t a pleasant one.

One thing to keep in mind is that the wheat and the weeds look similar.  More than once, Jesus had come against the religious leaders of his day.  These leaders studied the law faithfully and enforced strict observance from the people BUT they were hypocrites.  They appeared to be religious and faith-filled and yet it was appearance only.  (Luke 11:37-54 and Matthew 23:1-39)

Don’t be the wheat look-alike!  Take some time to ask yourself these questions.

Another lesson we can learn is patience.  Remember that it is God (and His angels) that do the separating.

As Christians, we need to focus on our relationship with God and be sure our actions and motives line up with scripture.  We are meant to point the way to God and not ourselves, spreading God’s love and grace.  While doing this, we will naturally be separating ourselves from the wicked seed.

The harvest is yet to come.  The parable of the weeds among the wheat is meant for the times that we live in and those yet to come.  Prepare your hearts for the harvest!