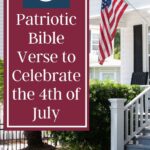 Looking for some patriotic Bible verses to mediate on this 4th of July?

I pledge allegiance to the flag of the United States of America, and to the Republic for which it stands, one nation under God, indivisible…”

Having grown up military, the pledge will be forever embedded into my mind, but as things change patriotism has mellowed in my heart and I’m often left grappling with politics versus faith.  While scripture isn’t full of patriotic Bible verses, let’s explore what it does say about patriotism and what our attitudes should be toward our country and its governing body.

Quick side note: Did you know that the phrase “in God we trust” first appeared on our coins in 1864.  Secretary of Treasury, Salmon Chase had received dozens of letters from citizens requesting a sentiment honoring God be placed on our currency.

The secretary is quoted as saying “No nation can be strong except in the strength of God, or safe except in His defense. The trust of our people in God should be declared on our national coins.”

I like this guy!  Ok, back to what the Bible say about patriotism…

What Does the Bible Say About Patriotism

What is patriotism?  By definition it is “love for or devotion to one’s country”.

Most often, we think of patriotism in regards to our military and being proud of the country we live it. Our idea of a true patriot is someone who has pride in their country and who will defend it – and sometimes to die for it (as our military does).

Britannica explains it in greater detail showing how patriotism stems from the Roman’s loyalty to the Republic.  This loyalty brought on the concept of love of the law and common liberty as well as the search for a common good and one’s duty to behave justly toward one’s country.

While patriotism is often coupled with pride, military strength, and cultural superiority, this early feeling of patriotism lends itself just as much to focusing on a way of life and the willingness to sacrifice for this freedom or liberty.

As we seek to better understand the biblical stance on patriotism, hopefully these patriotic Bible verses will be of help!

With God having set up Israel as a theocracy, meaning they were ruled by priests with His guidance, the political patriotism we have today is not a focus in scripture.  Even after Israel insists on a king and becomes a monarchy, the binding ties are religious rather than political. God did foresee Israel’s desire for a king and gives specific instructions in Deuteronomy, long before the conquest of Canaan.

“When you enter the land the Lord your God is giving you and have taken possession of it and settled in it, and you say, “Let us set a king over us like all the nations around us,”  be sure to appoint over you a king the Lord your God chooses. He must be from among your fellow Israelites. Do not place a foreigner over you, one who is not an Israelite.

The king, moreover, must not acquire great numbers of horses for himself or make the people return to Egypt to get more of them, for the Lord has told you, “You are not to go back that way again.”

He must not take many wives, or his heart will be led astray. He must not accumulate large amounts of silver and gold.

When he takes the throne of his kingdom, he is to write for himself on a scroll a copy of this law, taken from that of the Levitical priests. It is to be with him, and he is to read it all the days of his life so that he may learn to revere the Lord his God and follow carefully all the words of this law and these decrees and not consider himself better than his fellow Israelites and turn from the law to the right or to the left. Then he and his descendants will reign a long time over his kingdom in Israel.  (Deuteronomy 17:14-20)

From a biblical perspective, patriotism simply means to put God first – to always be loyal and faithful to Him.

Blessed is the nation whose God is the Lord, the people he chose for his inheritance. From heaven the Lord looks down and sees all mankind; from his dwelling place he watches all who live on earth—he who forms the hearts of all, who considers everything they do. No king is saved by the size of his army; no warrior escapes by his great strength. A horse is a vain hope for deliverance; despite all its great strength, it cannot save. But the eyes of the Lord are on those who fear him, on those whose hope is in his unfailing love, to deliver them from death and keep them alive in famine. We wait in hope for the Lord; he is our help and our shield. In him our hearts rejoice, for we trust in his holy name. May your unfailing love be with us, Lord, even as we put our hope in you.  (Psalm 33:12-22)

While there are not a crazy number of patriotic Bible verses, the Bible is clear about how we are to respect and treat governments.  These political verses will help us to effectively pray for our country as well as honor our leaders.

Paul instructs us to pray for our leaders, to respect those in authority, and to obey them.  Even in the midst of wicked Roman emperors Paul believed that it is God who places leaders into positions of authority.  (This reminds me of David, when King Saul was trying to kill him.  David refused to fight back because He did not want to hurt God’s anointed).

As Christians, we can show our devotion to God and to our country simply by steadfastly praying for our government and honoring the laws. But we must always keep in mind that God comes first.  It is great to be devoted to our country, but just like the children of Israel, our true authority comes from God.

It is necessary to have ruling bodies and I am so thankful for those who keep our country safe, but our allegiance belongs to Christ.  He remains our number one authority and we seek Christ’s kingdom first, our earthly kingdom second.

The apostles faced this soon after Christ’s death and resurrection.  The priests were determined for them to stop preaching that Christ was the Messiah.  Having always been faithful to the priests, and respecting them as teachers of the word, the apostles were unsure how to handle the situation.  In the end, they concluded “we must obey God rather than man”  (Acts 5:29)

Our love of God and country has a place and a purpose.  We Christians are the salt of the earth, the light of the world, keeping the truth until God calls us home.

Hebrews 11 talks about those who were wanderers and pilgrims on the earth, seeking a country.  They were not satisfied with their earthly governments, they sought a better one, a heavenly kingdom.  Only a heavenly kingdom can provide true peace and security.

Before closing, I’d like to go back to the nation of Israel.  If patriotic means loyalty to one’s country, than no one is more patriotic than God as He remains loyal to Israel to this day.

Time after time, the Children of Israel worshipped other gods and their hearts were turned against the true Yahweh.  They would suffer because of their disobedience and cry out to the God of their fathers.  And you know what God did?  He delivered them, every single time.

We, who have been covered by the blood of His son, have a special place in His heart.  He will faithfully deliver us when we pray, walk beside us when we are afraid, and guide our footsteps when we don’t know what to do.

There is no earthly government that can do that!

Can you think of any patriotic Bible verses that I missed?  Isn’t it a wonderful feeling to serve such a loyal and faithful God?  I’d love for you to share in the comments below what you feel the Bible teaches about patriotism.