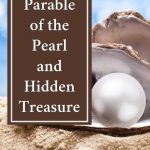 Jesus used a lot of parables when He taught. In essence, parables are short stories that compare two things, usually a physical object with a spiritual one.

Stories were often used in Jesus’ ministry because he could use them to bring across his point in a way that would be memorable.

At one point in his ministry, Jesus only spoke to the people in parables. Whenever he opened his mouth to speak, he used short stories to illustrate his point.

What is the Parable of the Hidden Treasure

The parable of the hidden treasure is found in Matthew 13:44 and it reads,

“The kingdom of heaven is like treasure hidden in a field. When a man found it, he hid it again, and then in his joy went and sold all he had and bought that field.” (NIV)

Can you imagine how that man felt? There he was going about his business in the field when he stumbled upon a hidden treasure. Had this happened today, it’s quite possible that the man would have taken the treasure and moved on with his life.

In our culture, possession is nine-tenths of the law. In other words, it was enough that the man had found the treasure. He could claim ownership of it based on that, but in Jewish society at the time, the treasure would have belonged to the owner of the field. Hence the reason the man sold everything he had to buy the plot of land.

What Does the Hidden Treasure Symbolize?

The word translated as treasure in this parable is the Greek word thēsaurós, (pronounced thay-sow-ros’;) and it could also mean wealth, literally or figuratively.

The dictionary defines treasure as something valuable. But as we know, treasure varies from person to person. What one man finds valuable may be of little importance to another person.

You’ll notice that Jesus never gave the details of what the man found in the field except to call it a treasure. That was to show that whatever it was, had great value to the man who found it. So much value, that he thought it nothing to sell everything he had to purchase the field and earn the right to claim the treasure as his own.

In the parable of the hidden treasure, the field represents the world. Jesus is the man who found the treasure and sold all he had to buy the field and we are the treasure. We are worth so much that Christ willingly gave up everything he had, even his life.

The moral lesson of the parable of hidden treasure is about the value of what the man found in the field.

He joyfully sold everything he had so he would have the right to claim the treasure as his. He didn’t want to take the chance that anyone could claim his treasure on a technicality.

The parable of the hidden treasure expresses how valuable we are to God. He would give everything he had, including his beloved son for the right to call us his.

What is the Parable of the Pearl?

The parable of the pearl is the sixth out of eight parables that Jesus told in a sequence based on the kingdom of heaven. Since it’s so short, I’ll reference it here:

“Again, the kingdom of heaven is like a merchant seeking beautiful pearls, who, when he had found one pearl of great price, went and sold all that he had and bought it.” Matthew 13:45-46 NKJV

In this short parable, the merchant is searching the world looking for beautiful pearls. He had a criterion that he was hoping would be met by each pearl. But, what is interesting is that, when he found one particular pearl, he sold everything he had to purchase it.

What Does the Pearl Symbolize?

The Bible has several mentions of pearls and in each case, it is something of extreme value, something to be treasured. Pearls were so precious to God they were used to form the gates of the new Jerusalem:

And the twelve gates were twelve pearls, each of the gates made of a single pearl, and the street of the city was pure gold, like transparent glass (Revelation 21:21 ESV).

I think it’s important to highlight that not only was the merchant actively looking for pearls, but he was specifically looking for beautiful ones. The original word used in that passage was the Greek word kalós, (pronounced kal-os’) and could have been translated in a number of ways including beautiful, valuable, precious, magnificent, or virtuous.

Since we’ve already established that we’re the pearl of great price, it means that’s how God sees us. We are beautiful, valuable, and precious to him.

Related: The Parables of Jesus

You may wonder as I did if the cost the merchant spent for the pearl was worth it? What was so special about that pearl? You see, “the pearl of great price” is us.

Parable of the Pearl Moral Lesson

If we are to understand the moral lesson of the parable of the pearl, we have to zoom out a little. Matthew 13 includes a series of parables on the kingdom of heaven. The kingdom of heaven is compared to seeds, yeast, treasure, and a net.

In each parable, Jesus highlighted one aspect of the kingdom of God.

But as we seek to understand the meaning of the parable of the pearl, there’s one other thing we need to look at first, and that’s the audience. When Matthew 13 begins, Jesus is speaking to the crowd. He told them about a farmer who sowed seeds with varying results. It was obvious some of the people were confused.

We know this because the disciples approach Jesus and asked him why he used parables to speak to the people. Jesus explained that stories were used so that only the spiritually aware would be able to understand (Matthew 13:10-17).

But then he takes it a step further and explains to his disciples what the first parable meant. And he doesn’t stop there, he continues to share a series of stories with his disciples until he gets to the parable of the great pearl.

The interesting thing is that when the merchant found the pearl he stopped looking for other beautiful pearls.

In a similar manner, God pursues us with an everlasting love. He wants nothing more than to redeem us for the penalty of sin. He does that knowing it will cost him everything but to him, we’re worth the price.

Parable of the Pearl and Hidden Treasure Reflection

The parable of the hidden treasure and the parable of the pearl are often told together because the message is so similar. In both cases, an item was considered so valuable to the person who found it, that they were willing to give everything they had to obtain it.

Both the merchant and the man who found the treasure represent Christ who willingly gave his life so we could have the hope of salvation and redemption.

Beloved, we are precious in his sight and God has been seeking after you for as long as you’ve been alive. Won’t you allow yourself to be found?

Aminata Coote is a Christian author and blogger at Hebrews 12 Endurance. She is passionate about teaching others how to study the Bible. She encourages women to spend time with God and root their identities in Christ so they’ll be able to focus on running the race God has set before them. She is also the author of multiple books including How to Find Your Gratitude Attitude and Through God’s Eyes: Marriage Lessons for Women. You can connect with her on Twitter, Facebook, Instagram, Pinterest, and Youtube.

488 shares
Scroll to Top
We use cookies to ensure that we give you the best experience on our website. If you continue to use this site we will assume that you are happy with it.OkNoPrivacy policy