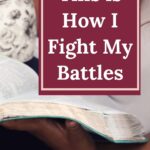 Look, I have given you authority over all the power of the enemy, and you can walk among snakes and scorpions and crush them. Nothing will injure you. Luke 10:19 (NLT)

It never occurred to me that I would need to struggle as a believer. People told me that once I gave my life to Christ, everything would fall into place. That sounded great since I never wanted to fight the enemy anyway.

I just wanted to be a “good” Christian,  (whatever that meant) go to church, mind my business and go to heaven.

No one had informed me that there was an enemy of my soul whose job was to steal from me, kill my joy and ultimately destroy my soul if he could.

He works in many ways, some more subtle than others, to launch everyday attacks. A common tactic he uses is to wreak havoc first on our minds.

Don’t copy the behavior and customs of this world, but let God transform you into a new person by changing the way you think. Romans 12:2a (NLT)

One by one, he would bring problems to my mind that would consume my thinking. I would experience:

Once the negative thoughts set in, my life with the Savior seemed to become cloudy.

Declaring my faith became a chore. My friendships flopped. Finances failed. Conflicts at work and problems at church left me feeling deserted and alone. Mentally, I was headed for a crash.

I began to wonder, “How do I fight this battle?”

Weeks of desperation passed until I finally read a familiar scripture that changed my perspective:

Yes, and everyone who wants to live a godly life in Christ Jesus will suffer persecution. 2 Timothy 3:12 (NLT)

Little did I know that persecution included the mental pressure and turmoil I was feeling. The problems of a believer are not limited to harassment by non-believers or enemies.

I had a constant enemy who I needed to fight if I wanted to have a life of hope and joy. That is when I discovered HOW to fight to get my mind back to a peaceful state.

Be patient in trouble and keep on praying. Romans 12:12b (NLT)

What I needed was a serious attitude adjustment coupled with prayer and fasting. My own mind needed to be renewed so that I could be clear on how to ensure a victory in a fight against the enemy.

I needed constant prayer to stay in communion with God and to discipline myself to hear His urging. The fasting was to build my faith and clear away the mental fog.

I started applying Biblical principles to help ensure my victory in the fight against the enemy and his assaults on my mind.

I had to recognize that I was indeed involved in a SPIRITUAL battle that I needed to face. No more sticking my head in the sand and ignoring my spiritual reality.

No one gets to heaven without a war here in the earth realm.

I reminded myself to put on all of God’s armor so that I would be able to stand strong against all the strategies of the enemy. (Ephesians 6:11) I understood that my biggest fights would be with unseen forces and not with other people.

While it is difficult to locate an invisible opponent, the Bible clearly pointed out that my enemies were evil rulers, authorities in the unseen world, and evil spirits. (Ephesians 6:12)

Trusting in God’s strategy, I would shut down the voices in my head and tune into His instructions. This meant I needed to do things God’s way rather than the way the world does them.

If someone offended me, rather than brewing on the inside, I would practice showing the opposite: an abundance of love and concern. Through this I discovered that you can defeat the enemy with kind words and compassion.

Because God wanted me to be strong, I made a sound decision to not compromise my belief system. There is an old saying that if you let the enemy ride, eventually he will want to drive. He's ruthless. If I compromised my integrity even once, that was enough traction for him to take advantage of me altogether.

There was no way I could entertain negativity or drama so I would walk away from arguments, avoid bad company, and restrict my conversations to only positive topics.

So humble yourselves before God. Resist the devil, and he will flee from you. (James 4:7 NLT)

I learned to digest more and more of God’s written word so that I would know exactly what I needed to do for Him.

It was clear that He required obedience over anything else. I certainly could not win a fight over evil if I insisted on dabbling in satan’s watercolors.

David said in Psalms that he hid God’s word in his heart so that he wouldn’t sin. By this, I knew that if I walked in my own selfish ways, I would be allowing the enemy to gain a foothold in my life.

My greatest move was in learning the main principles behind prayer. Paul tells the Ephesians in chapter 6, verse 18 to “pray in the Spirit at all times and on every occasion” and to “stay alert & be persistent in your prayers for all believers everywhere.”

Coming from a conservative church background, prayer to me was a quiet and solemn act of talking formally with God. As I learned more about it, I realized that it was a powerful weapon when used correctly.

Through prayer, I was able to verbalize my faith by reaffirming scriptural truths that applied to my situation.

When Satan tempted Christ, He came back and fought with the recited word of God. In following His example, I uncovered a golden nugget: that the word of God is indeed powerful and sharper than a sword.

I learned to speak truth instead of my problems. Not only did my personal faith grow, but my confidence in God also grew as I reminded myself of His promises. God responded by faithfully honoring those promises and blessing me with peace to endure the hard times.

As I submitted myself to God, step by step, I began to mature in new ways. I no longer was deathly afraid of the enemy and his tactics stopped intimidating me. I became strong enough to simply pray about a complex circumstance without my usual panic and frustration.

Accepting my role as a Spiritual Soldier allowed me to drop my “toys” and girlish ways in favor of spiritual weaponry and bravado in Christ. With every battle, I become more grateful for these weapons God provided to help keep me protected.

I've learned to fight his battle through prayer and ultimate faith and trust in Christ Jesus.

Take a moment today to consider the following as you examine ways you can fight the battles you currently face:

Dear Lord, I pray that You will increase my ability to recognize the attacks of the enemy. Help me to take a firm stand and to put on Your whole armor so that I can battle effectively. Grant me greater understanding of Your word and a heart that is devoted to prayer. Thank you for being my fortress strong tower in every situation. In Your Name, Amen

Looking for more Biblical Encouragement to feed your soul? Be sure to visit our Weekly Devotional Archives!

Paulina Stevenson is a Minister, Bible Teacher, Life Coach and Blogger. She specializes in spiritual development and healing from Toxic Relationships. You can find her at Kingdom Women Arise.

120 shares
Scroll to Top
We use cookies to ensure that we give you the best experience on our website. If you continue to use this site we will assume that you are happy with it.OkNoPrivacy policy