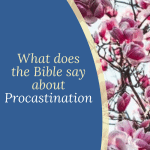 How often do you find yourself saying those four words?

Procrastination can affect us all at times but it is important to remember that it can cause much damage later on. Putting things off for later when they should be done now can impact people other than yourself! But aside from the worldly effects, what does the Bible say about procrastination? 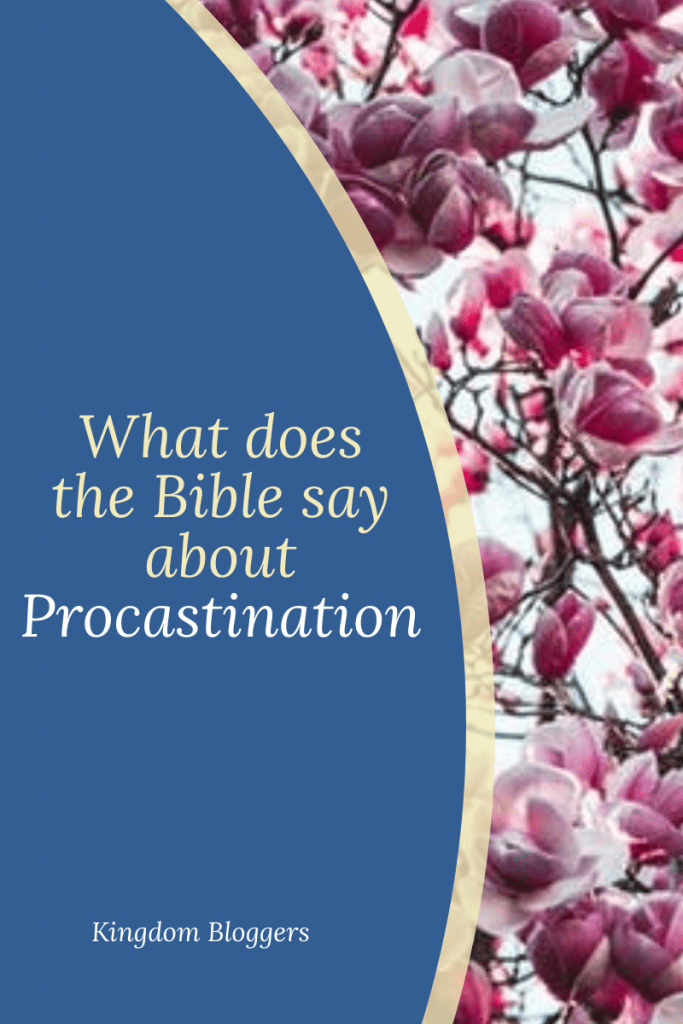 What Does the Bible Say About Procrastination

Procrastination is when you keep putting something off that you should be doing now – to another time. There are a lot of reasons people procrastinate: fear, anxiety, or an unwillingness to face change… Maybe even a fear of success.

Is Procrastination a Sin?

There are a lot of references in the Bible of people putting off things and suffering the consequences. In fact, God calls us to be good stewards of our time – making the most of the time we are given here on Earth.

No discipline seems pleasant at the time, but painful. Later on, however, it produces a harvest of righteousness and peace for those who have been trained by it. Hebrews 12:11 NIV

Be very careful, then, how you live—not as unwise but as wise, making the most of every opportunity, because the days are evil. Therefore do not be foolish, but understand what the Lord’s will is. Ephesians 5:15-17

When you continually procrastinate and put things off, you are not honoring the gift of time that God has given you!

What does the Bible say about Laziness

When people think of procrastination, they think of laziness.  They may even wonder, “what does the Bible say about laziness?”  But the truth is… those are two very different things.

Laziness means that you’re simply unwilling to work or use energy (Dictionary.com)

Procrastination, on the other hand, doesn’t mean you’re unwilling… it means you’re putting something off until later.

Is Laziness a Sin According to the Bible?

In Matthew 25:14-30, we read about the Parable of the Bags of Gold. The master had given different amounts of gold to each of his three servants. Two of them came back and had doubled the original amount. The third servant, however, dug a hole and hid the money. He made no attempt to be fruitful with the gold.

God created us to be fruitful with our time, with our resources. And if we don’t, we should expect repercussions from our laziness!

How long will you lie there, you sluggard?
When will you get up from your sleep?
10 A little sleep, a little slumber,
a little folding of the hands to rest—
11 and poverty will come on you like a thief
and scarcity like an armed man. Proverbs 6:9-11

Often times, when I’m considering a new project or looking at my to-do list, I end up staring blankly into space.  It’s at these moments that I think there might be some truth to the jokes you hear about blondes and their brain power.

The truth is though, I am blonde, and I know there’s not much truth to those jokes.  The real truth is, I sometimes allow myself to stare blankly into space rather than digging into the project or the to-do list.  Why is this?

For me, I believe that it usually boils down to a fear of failure.  This has been the spiritual root of procrastination for me in the past.

I start thinking that if I fail, people will think poorly of me… or perhaps they’ll just have their low opinion of me solidified.  Here’s the thing, though, about a fear of failure: it’s a projection.  The only one who’s really going to care if I fail is me.

The other thing in my life that has been a spiritual root of procrastination is just plain not knowing where to start.  What this really refers to is anxiety.  I get anxious that if I don’t start a project the exact right way, then the whole thing is obviously doomed to fail.   And why would I worry about a project failing?  Oh right… that pesky fear of failure…

Another thing that has caused me to procrastinate in my life is wanting to conserve my energy and resources.  At times, I’ve been worried about taking on something new and exciting because I was worried it would demand too much of me.  Too much of my time, too much of my money… too much of my heart.  Does any of that ring true to you?  It’s not laziness, it’s concern over something new making a change in your life.

If you look closely at my triggers, you’ll see that my spiritual root of procrastination can be reduced to one thing: FEAR.

This verse here makes it clear that not only is procrastination just not a good idea, but we’re also actually sinning when we procrastinate.  This really convicts me.  Today is one of those days that I’m really tired, and I’m trying to give myself all sorts of excuses.  For a good part of the day, I succeeded at talking myself out of doing anything productive.  But that’s a sin.  And that’s poor stewardship of the gifts that God has given me.  Just plain ol’ disobedience.  It’s not OK.

Whatever your hand finds to do, do it with your might, for there is no work or thought or knowledge or wisdom in Sheol, to which you are going.” – Ecclesiastes 9:10

Everything we’ve been given here on earth is a gift… it is our portion from the father.  Like in the verse above, it is a sin to waste those gifts.  God created us for his glory, and he wants us to live life abundantly on this side of the grave.

But seek first the kingdom of God and his righteousness, and all these things will be added to you. – Matthew 6:33

This is the bottom line: In everything we do, we need to seek first the Kingdom of God and his righteousness.  Do you think if we truly did that in every moment that we would still procrastinate?  I don’t think so- not at all.

We can’t let fear… or laziness… or anxiety… or any other host of reasons stop us from being faithful to our calling and faithful to the Lord.  We are here to build his kingdom.  We can’t do that while binging Netflix every. Single. Night.

God uses his word to communicate with us, and it turns out, he’s very clear on the issue of procrastination.

We can read libraries full of books on personal development, work ethic, fear of failure, procrastination, and more… but none of them can compete with the ultimate book.  Here are even more Bible verses about procrastination:

The Book of Proverbs is rich with wisdom on so many topics.  Procrastination is no exception!  Here is a list of just some of the Proverbs about procrastination:

At The Grace To Grow, Cecily blogs about faith, health, wellness, and personal growth. Cecily stresses the importance of these things while reminding her readers that God has given us the grace to grow in these areas. Perfection is not expected all at once. Cecily also brings to light that God gave us the power of free will— our choices are ours to make. The Grace To Grow is committed to helping women understand the responsibility of stewarding our free will wisely while resting in the arms of our Father. Cecily is married, and a mom to 3 young children. They live on a small homestead and enjoy living a full (and sometimes crazy) life together. You can also find her on Instagram and Pinterest.