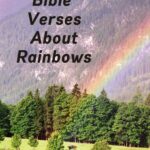 Are there actually Bible verses about rainbows? Indeed there are!

Rainbows often symbolize hope and God’s promises to us.  Have you ever worried about something or were praying about something and then you saw a rainbow?  Do you ever think God put that rainbow into the sky just for you?  I know I have.

Of course, we will get into the meat and potatoes of the topic in a minute but first I have a memory I want to share with you.

Picture a six-year-old blonde-haired little girl who well knew the Bible story of Noah and the ark, complete with a rainbow stretching from one end of the sky to another.  It was a miracle put in the sky by God.

Then science taught her what the rainbow was and how to create her own with a glass of water.  She was disappointed.  She thought it was a miracle and yet there was a scientific explanation for it.  In time she realized that all of creation is a miracle and science is merely a means by which we learn about our creator.

Repeatedly throughout scripture, God uses nature to drive important truths home to us.  “When you walk through the waters, I will be with you…”.  “That person is like a tree planted by streams of water…”

Rainbows in the Bible

Rainbows in the Bible. Who would have thought that to be true! There are actually 5 times that rainbows are specifically mentioned in Scripture.

The first mention of rainbows in the Bible is in Genesis and the story of Noah and the flood.

God instructs Noah’s family to be fruitful and multiply and repopulate the earth.  He then establishes a covenant.

I establish my covenant with you: Never again will all life be destroyed by the waters of a flood; never again will there be a flood to destroy the earth.”

What do Rainbows Symbolize According to the Bible?

The rainbow then is a symbol of God’s promise.  A covenant with mankind.  He was vowing never to destroy the earth with a flood again.  An important promise to those generations following Noah.

We know that before long man feared that God would send another flood to destroy the earth and completely disregarded his rainbow covenant.  They decided to build a tower in their effort to mask their fear of such a powerful deity.

They did not choose the same obedient and trusting path as our hero Noah.

God’s promises are everlasting, unbreakable because He is not subject to the same fallible character we all carry around.  With God, we can rest in His promises to love us, always be with us, provide us strength, and meet our needs.

We know that His grace extends to save us in a way that was quite different from Noah’s experience and we never need to be afraid of His judgment as long as we are covered by the blood of His son, Jesus.

The rainbow is also a symbol of God’s glory.  In the verses I have listed below, you will find that the rainbow surrounds the throne, encircles His head, and allows His brilliance to be seen.

Crossway has a great article on covenants and makes a good point talking about God’s promise to Noah.

There are 5 instances where rainbows are specifically mentioned in the Bible.

These verses of scripture show how God’s glory is seen as a colorful arch.  This bow could be akin to a bow and arrow in which we see God’s strength and power. The lack of arrows shows His grace.

I have set my rainbow in the clouds, and it will be the sign of the covenant between me and the earth. Genesis 9:13 NIV

Whenever the rainbow appears in the clouds, I will see it and remember the everlasting covenant between God and all living creatures of every kind on the earth. Genesis 9:16 NIV

Then I saw another mighty angel coming down from heaven. He was robed in a cloud, with a rainbow above his head; his face was like the sun, and his legs were like fiery pillars.  Revelation 10:1 NIV

And the one who sat there had the appearance of jasper and ruby. A rainbow that shone like an emerald encircled the throne.  Revelations 4:3 NIV

Like the appearance of a rainbow in the clouds on a rainy day, so was the radiance around him. Ezekiel 1:28 NIV

What does the rainbow then mean for you?  Obviously, you will not die in a worldwide flood. I think we can reap several nuggets from our study on rainbows.

First, God always keeps His promises.  Secondly, God loves His creation so much that He doesn’t want to destroy it but will go to strong lengths to preserve it.  Third, we are created in His image and He wants to establish a covenant with us.  He wants to be connected to us.

Lastly, God’s glory is like the miracle of a rainbow in the sky.  God’s creation is an expression of Himself and the rainbow is no different.