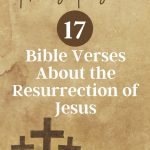 The darkest day of our world was when Adam and Eve sinned, separating themselves and all future generations from their Creator.  Since that time, man has made hundreds of futile attempts to connect with a spiritual being, but it wasn’t until that long-awaited Sunday morning when an angel announced “he is risen” that our search had come to an end.

Our connection to our creator has been restored, we have been redeemed.  Rejoice with me as we explore these Bible verses about the Resurrection of Jesus and embrace what they mean for all of us.

Mere days before, the apostles had witnessed Jesus’ arrest, trial, beatings, and crucifixion.  They had watched their beloved rabbi as he hung on the cross.  They heard his words of comfort to the criminal hanging beside him, his forgiveness to those who had put him there, and his cry “it is finished”.

Wonderful is the angels’ proclamation from Matthew 28:6 (NIV):

He is not here; he has risen, just as he said. Come and see the place where he lay.

The ground shook and darkness came over the land.  Satan rejoiced that he had defeated God.  Here, God’s own son, had died a cruel and public death.  The victory surely belonged to Satan.

Fear came on all of Jesus’ followers as the women wept at his feet.

Praise God the story does not end there!  Sunday morning finds the women going to the tomb to anoint Jesus’ body, only the stone had been rolled away and instead of the body of their crucified teacher, they were met by angels declaring he had risen.

Death had been defeated.

Why is the Resurrection So Important

Why is Easter important to Christians (and to the lost)?  Why do we celebrate the resurrection and deem it important?

Briefly put, it is the essence of our faith.  Let me explain.

When God created man, He breathed life into him, making him a living soul.  When man sinned, his ultimate punishment was death.  He would die both physically and spiritually.  He could not stand before the righteousness of God as the sin in which he was born made him unclean.  Throughout the Old Testament, beginning in Genesis chapter 3, God promises a redeemer, someone to remove the penalty of death.

The Lord commanded the children of Israel, His chosen people, to make certain sacrifices.  These sacrifices were required to “cover” the sin of His people.  They did not take that sin away nor did they remove the punishment of death.

We know that God loved the world so much that He sent His own son (John 3:16) to be a sacrificial lamb.  The ultimate sacrifice.  The final sacrifice.

Jesus had to die, but he also had to raise from the grave.  He had to defeat death.  BUT (and here is the catch) it is not enough that Jesus died and rose again, we must call on his name in order to be saved.  We must believe who he is and what he did for us.  Paul emphasizes this in the following verses.

If you declare with your mouth, “Jesus is Lord,” and believe in your heart that God raised him from the dead, you will be saved.  (Romans 10:9)

But it has now been revealed through the appearing of our Savior, Christ Jesus, who has destroyed death and has brought life and immortality to light through the gospel.  (2 Timothy 1:10)

Resurrection Scriptures to Celebrate Our Hope in Christ’s Return

Let’s study a couple of Easter resurrection verses about the Messiah and God’s plan to redeem the world unto Himself.

There are dozens of prophecies about the coming redeemer in the Old Testament. He will swallow up death forever. The Sovereign Lord will wipe away the tears from all faces; he will remove his people’s disgrace from all the earth  (Isaiah 25:8)

I will not die but live, and will proclaim what the Lord has done. The Lord has chastened me severely, but he has not given me over to death.  (Psalm 118:17-18)

Isaiah 53 is a beautiful description of the promised Messiah.  God explains to us that the redeemer would take our pain and suffering and bear it upon himself.  He would be oppressed and afflicted, our punishment would be on him and he would be “cut off from the land of the living”.  Isaiah prophecies that the promised redeemer would make intercession for our transgressions and that he would see the “light of life”.

While Jesus was on earth, he taught his disciples what would happen to him and his purpose for coming to earth.  He explained that he came to bring eternal life that their souls might not experience death.

“Do not let your hearts be troubled. You believe in God believe also in me. My Father’s house has many rooms; if that were not so, would I have told you that I am going there to prepare a place for you? And if I go and prepare a place for you, I will come back and take you to be with me that you also may be where I am. You know the way to the place where I am going.”  (John 14:1-4)

Whoever eats my flesh and drinks my blood has eternal life, and I will raise them up at the last day.  (John 6:54)

The resurrection story is told a bit differently in each of the gospels.  My favorite is John’s version.  Mary Magdalene, a faithful follower of Christ is at the tomb crying.  Clearly, the events of the last several days had taken a toll and she is grieving, her heartbroken, her mind confused.  Jesus appears to her.  I have always thought that it hurt his heart to see her sobbing and he reaches out to her.

He asked her, “Woman, why are you crying? Who is it you are looking for?”

Thinking he was the gardener, she said, “Sir, if you have carried him away, tell me where you have put him, and I will get him.”

Can you imagine her overwhelming joy at seeing him alive, speaking to her?  Maybe more than joy, maybe relief, faith, excitement, and awe.

The Bible doesn’t stop there.  We are blessed to have the writings of the apostles to teach us how to apply this new found faith to our lives and give us a hope of Christ’s second return.  Jesus’ work is not finished.  He remains with us, working in our lives, acting as a mediator between us and God, and waiting for the time when he returns to bring his children home.

For he must reign until he has put all his enemies under his feet. The last enemy to be destroyed is death.  (1 Corinthians 15:25-26)

For the Lord himself will come down from heaven, with a loud command, with the voice of the archangel and with the trumpet call of God, and the dead in Christ will rise first. After that, we who are still alive and are left will be caught up together with them in the clouds to meet the Lord in the air. And so we will be with the Lord forever.  (1 Thessalonians 4:16-17)

But if Christ is in you, then even though your body is subject to death because of sin, the Spirit gives life because of righteousness. And if the Spirit of him who raised Jesus from the dead is living in you, he who raised Christ from the dead will also give life to your mortal bodies because of his Spirit who lives in you.  (Romans 8:10-11)

What is Our Hope Through Jesus’ Resurrection

So, what is our hope through Jesus’ resurrection?  What does this mean to us personally?

We’ve already discussed Jesus being our sacrificial lamb, bringing us forgiveness of sins and how he restores our relationship with God.  We know that because of Christ, our souls will not die, but live with him for all eternity.

“Praise be to the God and Father of our Lord Jesus Christ! In his great mercy he has given us new birth into a living hope through the resurrection of Jesus Christ from the dead.” (1 Peter 1:3)

“He was delivered over to death for our sins and was raised to life for our justification.” (Romans 4:25)

The good news is, that even on earth we can live victorious lives through our faith in Jesus.  His work was not only for the afterlife but that we might conquer sin in our daily lives and remove the bondage we are currently under.

Isn’t that a wonderful thought?  We can live victorious while on earth.  All of the corruption, temptation, anxiety, and pain that this world offers is nothing compared to the spirit of God given to those who believe in the death and resurrection of Jesus.

For if we have been united with him in a death like his, we will certainly also be united with him in a resurrection like his.  For we know that our old self was crucified with him so that the body ruled by sin might be done away with, that we should no longer be slaves to sin— because anyone who has died has been set free from sin.

“Now if we died with Christ, we believe that we will also live with him. For we know that since Christ was raised from the dead, he cannot die again; death no longer has mastery over him. The death he died, he died to sin once for all; but the life he lives, he lives to God.”  (Romans 6:5-10)

Whether you are a mature Christian or seeking answers, I pray this post spoke to your heart and brought you closer to Christ.  May Jesus fill you with peace and joy as you walk in faith toward that glorious day when the earth is restored, the curse of sin is broken, and we dwell in his presence forever.