I remember standing on the white line in gym class waiting to be chosen for a team in a game of kickball. It seemed like I stood for hours wanting to hear my name called, but no one ever picked me. Again, I was the last one left chosen. I walked over to the team I was on, and a boy told me “We didn’t want you on our team.” I shrugged my shoulders and took my place in line waiting for my turn to kick the ball. As I held back my tears from the sting of his words, I whispered to myself, “I just wanted the joy to be chosen.” I eventually reminded myself that I was already Chosen by God! 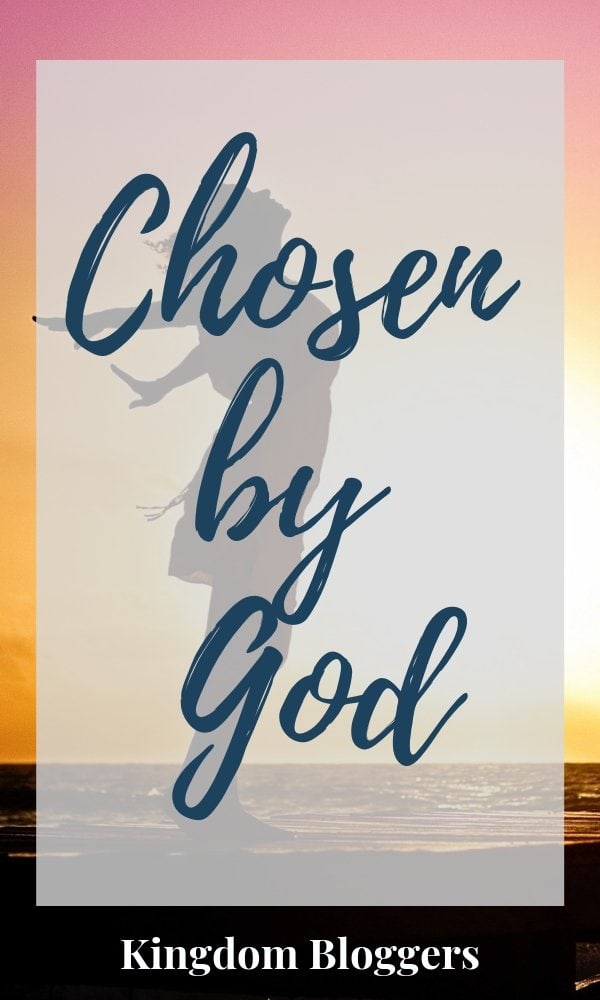 Contents hide
1 The Early Bloomer
2 Middle and High School
3 Desperate to be Chosen
4 Looking for Truth
4.1 God Chose Me First
5 More Bible Verses About Being Chosen by God
5.1 God Chose Me to Be on the Best Team

I wish I could say I hated gym class, but I didn’t. I was an awkward middle school girl, and I stood out like a sore thumb. I was already taller than most of my peers and had larger breasts than all the girls in my class. I was an early bloomer, and middle school boys and girls are cruel.

Bullies Are Mean! Day after day there were mean, cruel remarks. Bullying wasn’t talked about in my school, but we all knew who the bullies were. You didn’t dare confront those bullies because your school year would be even more of a living hell. Instead, it was living in constant fear of what someone was going to do or say to you at any given moment that would embarrass you in front of everyone else.

Don’t get me wrong, I had friends, but none of them were in my classes. The only time we saw each other was in the cafeteria, and even then the rule was you had to sit with your class. It wasn’t until we were all on the playground that we could talk with each other. I packed my lunch, and by the time I ate and could leave the lunchroom, it didn’t give me much time on the playground.  By then everyone was already involved playing a game of kickball, softball or jumping rope, and once again I was standing on the sidelines wishing I knew the joy to be chosen.

Middle school came and went and along came high school. High school came with its own problems. At least by then, nearly everyone looked the same. But I was still the awkward one. I came to learn that teenage boys are the worst. Between jockeying for position and hormones gone wild, they are a breed all their own.

Desperate to be Chosen

I grew up in a time when the prevailing attitude was, “Boys will be boys.” Even as bad as they were, I somehow found myself wanting to be chosen by one of them so I would feel special like I counted. I wanted to matter to somebody even if only for a little while. Prom came and went and once again I found myself on the sidelines. Again, I didn’t experience the joy to be chosen.

What is Wrong with Me? Have you ever been in the situation where you wanted to be chosen and weren’t? How about when you knew your friends were getting together or going somewhere, but they didn’t invite you? There were times I wanted to scream, “Choose me! Why am I not good enough?”

It wasn’t just in school that I wanted to be chosen, but in my adult life too. Have you ever wanted a job badly that you knew you were well qualified for but didn’t get hired? I began to ask myself, “What is wrong with me? “

I was at a pivotal point in my life, and I needed answers. I had gone to church all my life and yet felt a huge void that came from not being chosen or accepted. As I look back, maybe part of it was where I went to church. I learned I would never be good enough for God, so I had to fight to be chosen by Him continually. I had accepted Christ, but I wasn’t sure if He had accepted me. I made mistakes, and every time I sinned, I was reminded once again how unworthy I was of God’s love. It was exhausting!

I knew there had to be a better truth than what I learned so I began to search the scriptures for myself. It was here for the first time I read this scripture and understood what it truly meant for me.

In this new life, it doesn’t matter if you are a Jew or a Gentile, circumcised or uncircumcised, barbaric, uncivilized, slave, or free. Christ is all that matters, and he lives in all of us. Since God chose you to be the holy people he loves, you must clothe yourselves with tenderhearted mercy, kindness, humility, gentleness, and patience. Make allowance for each other’s faults, and forgive anyone who offends you. Remember, the Lord forgave you, so you must forgive others. Colossians 3:11-13 NLT

The world didn’t choose me, But God chose me! Not only did God choose me, but He forgave all my faults too! All of the hurt, anger, and bitterness I had been holding onto for years because of my desire to be chosen was released because I found out God chose me all along.  God chose me before the foundation of the world, and God chose you too! Now, I understand the joy to be chosen!

Even before he made the world, God loved us and chose us in Christ to be holy and without fault in his eyes. Ephesians 1:4 NLT

What a beautiful truth! I found that God chose me even before middle school, high school and my adult life! God loved me and chose me even before I was a twinkle in my momma’s eye. God doesn’t judge my worth based on my awkwardness or my many faults. He chose me in spite of my faults, and it is the same for you too!

More Bible Verses About Being Chosen by God

For you are a holy people to the LORD your God; the LORD your God has chosen you to be a people for His own possession out of all the peoples who are on the face of the earth.” Deuteronomy 7:6

You did not choose Me but I chose you, and appointed you that you would go and bear fruit, and that your fruit would remain, so that whatever you ask of the Father in My name He may give to you.” John 15:16

But you are a chosen race, a royal priesthood, a holy nation, a people for God’s own possession, so that you may proclaim the excellencies of Him who has called you out of darkness into His marvelous light.” 1 Peter 2:9

So now you Gentiles are no longer strangers and foreigners. You are citizens along with all of God’s holy people. You are members of God’s family.” Ephesians 2:19

God Chose Me to Be on the Best Team